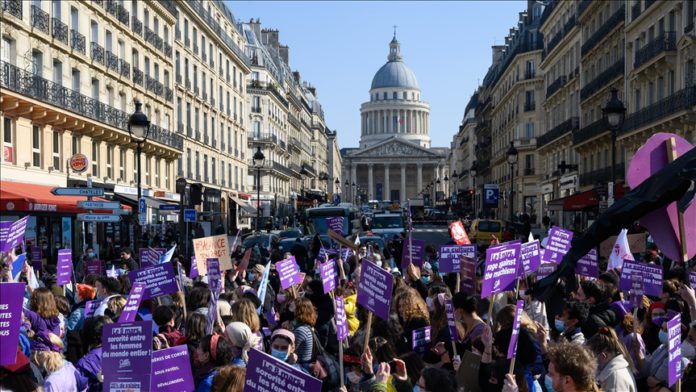 Women of all color and ethnicities, some dressed in their work uniforms, others holding colorful flags, banners, posters and armed with musical instruments assembled in Paris on Monday afternoon for a protest march against the deteriorating condition of women amidst the ongoing pandemic on International Women’s Day.

An estimated 30,000 women and men participated in the march, which several organizations and unions used the opportunity to protest and highlight gender atrocities, sexual abuse at workplace, and demand equity in rights and work payment for women.

Around 40 international, local organizations and left-wing, ecology political parties, came together under the collective “feminist strike” to denounce pay inequality and exploitation.

“The pay gap between men and women persists at 25%… It is as if every day from 3:40 pm, women worked for free… We will be on strike along with women all over the world to refuse to pay the price of the crisis with our jobs, our salaries, our bodies,” a statement from the collective said.

The Federal Union of State Trade Unions (UFSE) and General Confederation of Labor – (CGT) held demonstrations in front of the ministry of culture, ministry of labor, inside the Paris metro stations holding large banners in support of the “invisible, precarious women workers.”

In France, women represent 80% of part-time workers, 60% of contract workers, 80% of single-parent families and are often the first victims of precariousness and adverse poverty precipitated by the Covid-19 pandemic, a statement signed by various trade and workers unions said.

“Lockdown, work from home, closure of schools and nurseries, have contributed to penalizing women with negative consequences on their careers, physical health, risking them to increased instances of domestic violence and a weakening of access to care,” said the statement.

They demanded the government to enforce a law guaranteeing “equal pay for work of equal value” in the private and public sectors, upgrading wages in predominantly female occupations and strengthening public services for women.

They have also asked employers to widen the scope of convention No. 190 and recommendation No. 206 of the International Labor Organization (ILO) which recognizes elimination of violence and harassment at work places to protect work of victims of domestic violence.

The National Union of Midwives, a key cornerstone of safeguarding women’s health, continued its strike for the fourth time this year.

The government has failed to meet the demands of 23,000 midwives including granting medical profession status to their work in hospitals, increasing salaries and number of staff.

The French government has increasingly come under criticism for failing to set an example to protect women’s rights.

The most visible blunder committed by the President Emmanuel Macron administration is allowing Interior minister Gerald Darmanin who is under investigation for rape, to head the ministry. Women demonstrators held large signs of “get out Darmanin” and posters showing him behind the bars in the march.

Elisabeth Moreno, minister delegate in charge of Gender Equality, who is the only minister of color in the current cabinet, criticized Macron for lacking efforts in gender representation.

During a TV interview hosted by RTL – Le Figaro – LCI Grand Jury on Sunday, Moreno disclosed she told Macron that he was “not setting an example’” when it came to gender parity. Amongst the 13 close members of the cabinet, the deputy chief of staff Cecile Geneste is the only woman.

Although women are leading important ministries like defense, culture, environment and labor in the current government, top cabinet jobs are still held by men.