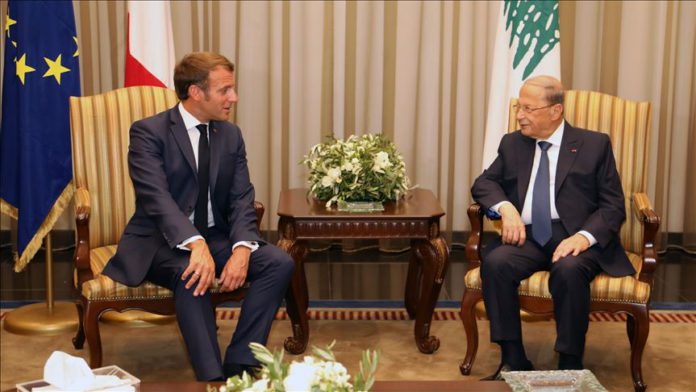 In a press statement, Macron pointed out that he returned to Beirut to verify developments regarding the humanitarian aid that followed the deadly explosion at Beirut port on Aug. 4.

“The second reason for my visit is the centenary of Greater Lebanon and conducting an assessment of the general situation, and I saw that the process has begun with the appointment of a prime minister,” he said.

Macron will hold talks with senior government officials in light of the country’s political transition.

“I want to ensure that the government that is formed will save Lebanon and launch anti-corruption reforms, energy reform and reconstruction,” he said.

On Aug. 9, Paris hosted a donors’ conference via video link to solicit emergency international humanitarian aid for Lebanon after the blast, during which Macron pledged to deliver aid directly to the Lebanese people.

Aoun on Monday invited Mustapha Adib, a diplomat, to form the new government.

Adib secured 90 votes out of 120 in parliamentary consultations to claim the post. The voting was held at the presidential palace in Baabda, Beirut.

On Sept. 1, Lebanon celebrates the centenary of the founding of Greater Lebanon, which was declared in 1920 after border demarcation among the countries that were under Ottoman rule, including Syria and the Mount Lebanon Mutasarrifate.