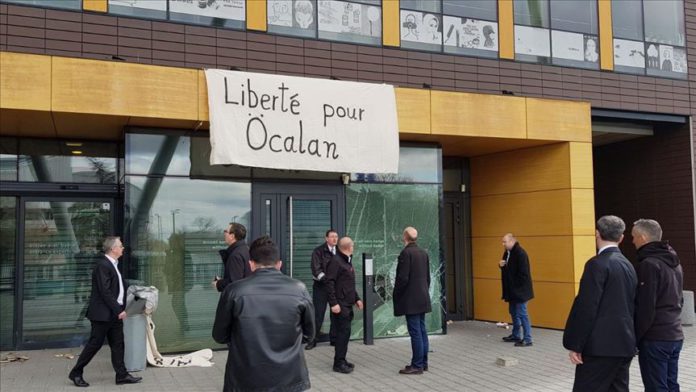 France has continued to support the separatist terror organization, the PKK, for 40 years although it is recognized as such by the EU.

Paris’s relations with the PKK, which the European Council added to its terror list in September 2001, began with the election of French President Francois Mitterrand in 1981.

The PKK’s activities in France intensified during his two-term tenure until 1995.

“You keep taking action. French authorities say, unless Turkey engages heavily with the Kurdish problem, it will be impossible for them to act the way Europe wants. For this reason, the PKK must be politicized and my country will do its part. I will work for my country to give you freedom of movement,” said the former French first lady after a PKK attack.

Trying to show itself as the representative of Kurds, the PKK popularized the term “mother of the Kurds” for Danielle Mitterrand, while her husband ruled France.

During the post-Mitterrand period, which paved the way for the PKK to find support and organize in Europe, the organization maintained relations with French administrations during the Jacques Chirac and Nicolas Sarkozy presidencies. Associations, foundations and institutes affiliated with the PKK continued activities in France.

With the outbreak of civil war in Syria in 2011, the YPG/PKK found more space and dreamt of establishing a state in northern Syria by taking advantage of the turmoil, with France its greatest supporter among European countries.

Especially since the tenure of former President Francois Hollande, who took office in 2012, the terror group has been able to continue its propaganda and stage protests in Paris and other cities.

Hollande hosted the ringleaders of the YPG/PKK in military uniforms at the Elysee Palace in 2015.

Current French President, Emmanuel Macron, also supported the group by accepting YPG/PKK terrorists under the SDF moniker at the Elysee Palace in 2019.

Following the meeting, it was reported by the Palace that Macron assured the organization that “active support would be continued.”

After Turkey’s anti-terror Operation Peace Spring to fight the YPG/PKK and ISIS/Daesh terrorists, the French parliament reiterated its support for the YPG/PKK and once again clarified its position to stand with the terrorist organization.

Denying its links with the PKK, Macron defended his country’s backing for the YPG, claiming it was fighting Daesh terrorists.

However, abundant evidence points to the clear links between the YPG and PKK, with both their insignia carried side-by-side during public demonstrations in France and Europe, where there the PKK has attacked Turks numerous times. Also, they are both are managed from a single center in Europe, with multiple investigations, reports and confessions linking the YPG with the PKK, which is on the EU’s list of terror organizations.

France, which had been openly supporting the terror organizations’ intention to form a state in northeastern Syria, was heavily opposed to Turkey’s anti-terror Operation Olive Branch in 2018 to clear the region of terrorists.

The Macron administration not only had a military presence in the area occupied by the YPG/PKK in Syria, but French military advisors also trained terrorists at the Ayn Isa base.

On the other hand, the European Parliament (EP), located in Strasbourg, France, functions as the PKK’s home.

The EP does not hesitate to offer political support to the organization.

In addition, in front of the EP building, PKK supporters have organized a non-stop protest for the release of the group’s supposed leader.

Former EP Turkey Rapporteur Katie Pirie said “the PKK is not a threat to Europe.” That sums up the general attitude toward the terror group in France and in Europe.

Thanks to the privileges the French administration provided the PKK, the group is trying to increase its influence by putting pressure on the majority of Kurdish people who are not pro-PKK in France.

The group collects money from Kurds through its so-called representatives in France. Those who do not support the group are not allowed to continue businesses and live in cities where support for the PKK is strong.