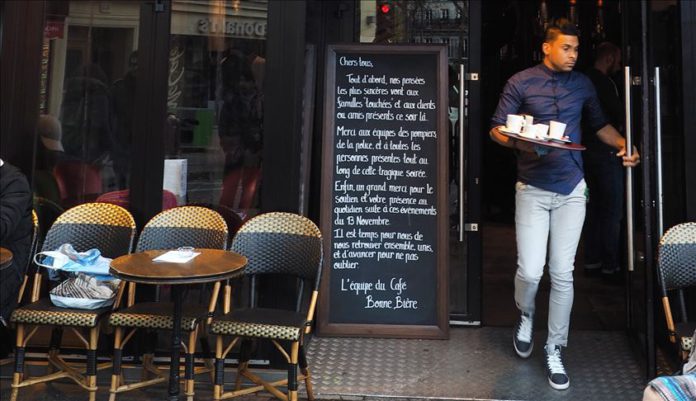 The phrase “cafe society” is almost inextricably linked to the city of Paris. The multitudinous cafes that line its streets seem part of the geography, located on every corner and on thoroughfares large and small. To sit in a cafe in Paris is to take a seat at a mythical place, where intellectuals have debated and great leaders discussed, to partake in the very ethos that has defined Paris.

But the onset of the coronavirus pandemic clobbered the Ile-de-France region, and the nation’s capital within it, causing cafe society to come to a screeching halt on March 15. Under official decree by President Emmanuel Macron, cafes, restaurants, and bars were ordered shut nationwide for a month, along with every other nonessential business. The decree was extended to May 11. All businesses were set to then reopen — except culinary establishments.

The French government has set a tentative date for the reopening of cafes, restaurants, and bars for June 2, announced by Prime Minister Edouard Philippe Thursday morning.

There are just under a quarter million restaurant establishments in France that employ an estimated 1 million people. Despite a pledge of assistance by the French government to aid businesses in the wake of two months of lost revenue, restaurant owners are still reeling from the shutdown.

In an interview with France24, Michelin-starred chef and TV personality Philippe Etchebest offered a thorough analysis of the situation.

“The industry is seriously threatened, and it’s been that way since the beginning of this crisis. We were the first to close and we’re going to be the last to open,” he said, adding: “We have restaurant owners who have low cash levels and that’s because they’ve been suffering for the past year and a half, because of all of the strikes, too.”

“Morale couldn’t be any lower,” Etchebest also said, reporting the two recent suicides of industry colleagues due to stress over the crisis.

In true industrious French fashion, Etchebest is focused on finding solutions. Along with 20,000 fellow French restaurant owners, he helped outline seven different protocols that each establishment can set up to reopen, since social distancing policies will still be in place. The government will publish the protocols into a report introducing the protective measures to be implemented.

He longs for the return to vibrant cafe life as much as anyone else.

“We’re talking about lively venues where there used to be so much hubbub, people would converse. Now these restaurants are going to look like retirement homes,” he joked.

Etchebest was also one of many industry professionals who met with Macron and four of his key ministers on April 24 to discuss remedies to their losses. It included the proprietors from the hotel, cafe, restaurant, tourism, and leisure industries.

The emergency rescue plan they helped outline will include the ability to access a solidarity fund set up by the government, even after lockdown is lifted; exemption of social security contributions from March to June for SMEs, and larger entities benefiting from the same, as well as tax breaks and debt cancellation, depending on their financial situation; and cancellation of certain rents and royalties during the period of closure.

Etchebest emphasized that he and his colleagues were all in agreement that opening would have no point if another wave of infection would then force closure again. He predicted a drop of 50% in revenue from the coronavirus pandemic.

The prime minister’s Thursday address also included an €18-billion ($19.4-billion) aid package for the tourism industry to navigate their way out of the crisis, an incremental part of which are cafes and restaurants.

The tourism sector provides nearly 8% of the country’s GDP. The government is working on the creation of an investment fund to aid the sector as well as the related restaurant businesses.

The heart of the matter, when it comes to de-confinement and restaurant life, will be the need for social distancing. In a cafe culture that’s renowned for its intimate seating in caned chairs at cozy tables, it will be difficult, to say the least.

The first day of lockdown proved that to be true: The police were out on Monday breaking up large groups who had gathered in the sunshine on the steps of Montmartre, along the Canal St. Martin and the Seine.

As a result, Interior Minister Christophe Castaner announced certain of these places would be declared no-alcohol zones. When groups gather as they do, the respect for keeping one meter distance is generally dispensed of.

Economy Minister Bruno Le Maire understands very well the value that cafes and restaurants bring to France and to the world.

“It is very hard financially. It is a psychological shock that you cannot underestimate for the 246,000 restaurant establishments in France. We will be there at the moment they open and in the months to come.”

Thailand allows use of medicinal marijuana