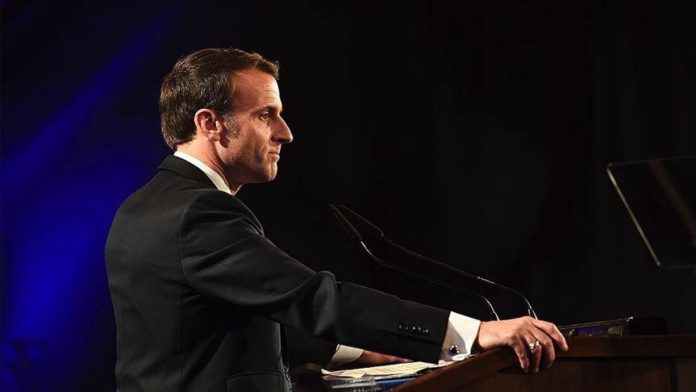 During the visit, speaking about the recent tensions with France over a claim of vessel harassment in the Mediterranean, Turkey’s Foreign Minister Mevlut Cavusoglu said: “We have proved everything that happened and the EU and NATO cannot prove otherwise. France has not acted with honesty. Therefore, France should apologize from Turkey and extend their apologies to the EU and NATO.”

Thus, France turned to the EU platforms to seek support against Turkey, urging other member states to back French claims.

As the situation on the ground in Libya changes rapidly after Turkey’s agreement with Libya’s internationally recognized government, French President Emmanuel Macron started to feel uncomfortable with warlord Khalifa Haftar’s loss of power.

French diplomats resorted to a similar tactic as they did last year ahead of a NATO meeting in London for Syrian crisis, leaking the alliance’s secret defense planning information to the press, aiming to put pressure on Turkey.

Similarly, in recent weeks, France leaked false information to the press claiming that the Turkish navy harassed a French warship in the Eastern Mediterranean.

NATO Secretary-General Jens Stoltenberg has announced that military authorities will look into the incident ‘”to bring full clarity into what happened”.

The international press reported that the result, which France desired for, did not not come out of NATO’s report.

Unable to find what it hoped from NATO, France suspended its participation to the alliance’s naval mission Sea Guardian, and turned its attention to the EU platforms.

EU, which ignores the legitimate rights of Turkey and the Turkish Republic of Northern Cyprus in the Eastern Mediterranean due to the bloc’s “membership solidarity” with Greece and Greek Cypriots, provided France with the support it needed.

With France’s efforts, Turkey was brought into the agenda of the Foreign Affairs Council to be held on July 13.

Meanwhile, the European Parliament on Thursday will discuss “stability and security in the Mediterranean and the negative role of Turkey”.

French President Emmanuel Macron’s aggressive attitude against Turkey is thought to be related to his own domestic policy interests rather than Ankara’s actions, considering how anti-Turkey rhetoric is favored among right-wings.

Since Macron took over the presidency three years ago, the country has been shaking with protests due to deepening economic and social problems.

Macron is also struggling with political instability as the country’s Prime Minister Edouard Philippe resigned last week, along with other ministers.

The result of the local elections also indicated he could not create political power in the country.

Macron, hit hard recently in terms of economy and political interests, seems to need more support from the EU in the coming period.

December 18, 2019
We use cookies to ensure that we give you the best experience on our website. If you continue to use this site we will assume that you are happy with it.Ok