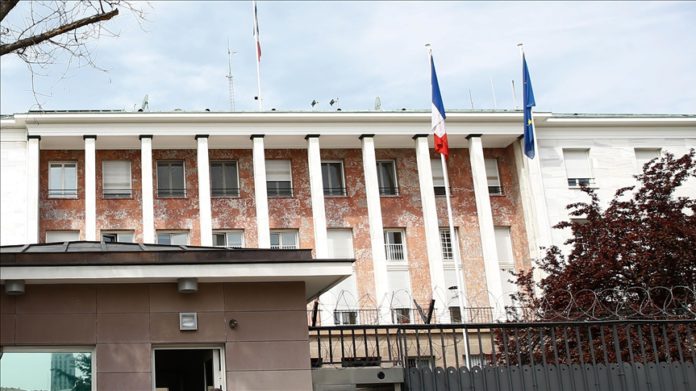 France announced Tuesday that it will reopen its embassy in Libya’s capital Tripoli and demanded the immediate withdrawal of foreign fighters.

The announcement, which came a week after Libya’s new interim government took office, was made after Mohammad Younes Menfi, the new head of Libya’s Presidential Council, and the council’s vice president Musa al-Koni met with President Emmanuel Macron at the Elysee Palace in their first official overseas visit.

The embassy will be opened next Monday, more than six years after it was closed down as the country descended into a civil war in July 2014.

Macron expressed his full support for the unity government which was sworn in on March 16, replacing the UN-backed Government of National Accord (GNA), which controlled Tripoli and parts of the country’s west, and the eastern-based Libyan National Army (LNA) led by warlord Khalifa Haftar. He hoped to welcome Prime Minister Abdul Hamid Dbeibeh soon.

Macron said the new administration must maintain the cease-fire as well as political and military unity to ensure a transition towards elections by the end of the year.

“Libyans have the right to a stable country and full sovereignty,” he added.

Menfi and Al-Koni said there were several challenges ahead of the new government but they were confident of holding elections scheduled for Dec. 24.

“We have a debt towards Libya after a decade of disorder,” Macron said further, promising to work with Italy, Germany and the European Union to further political stability. He said it is a common agenda of the Mediterranean, Sahel and African countries to eradicate terrorist groups, smugglers and ensure political stability in Libya.

“We have to ensure that all foreign forces leave the country[…] the Libyan forces under the unified government are the only legitimate force to secure the country,” he added.

Paris has been accused of backing Haftar’s forces and has repeatedly condemned Ankara’s intervention in favor of the GNA against Haftar, terming it “a dangerous game.”

On the economic front, Macron emphasized the need for full transparency by the central bank on the release of funds from state-run National Oil Corporation.

The NOC had held back oil revenues in the Tripoli-based Libyan Foreign Bank instead of paying them directly to the government amid political uncertainty. After the new government is sworn in, the NOC is set to release the revenues to the central bank.