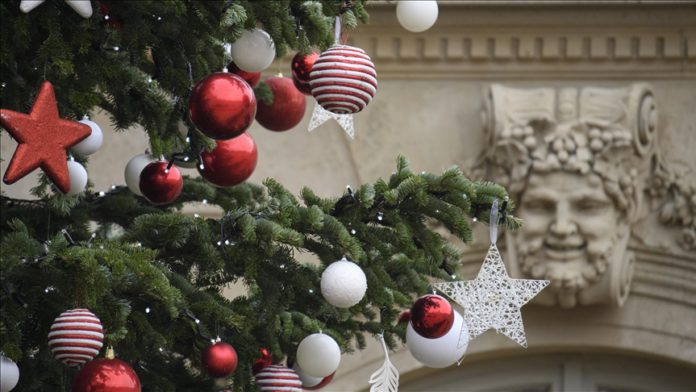 New Year’s Eve promises to be a subdued affair in France with strict measures including an 8 p.m. curfew and the deployment of a 100,000 strong police force for vigilance as authorities expect the possibility of uncontrolled new cases of COVID-19 from January.

In view of the current restrictions, most people in France will have to spend the last evening of the year at home. In the capital city Paris, where revelers would usually flock to the Champs Elysee for the festivities or around the Eiffel Tower with champagne in hand for the countdown to midnight, police and gendarmes will be out in the streets to break up large gatherings in public places.

The exclusive New Year’s dinner at gastronomic restaurants, drinks at bars and an evening of partying at nightclubs stands cancelled as all outdoor places including theaters remain shut. This means the glamorous but expensive parties at the Moulin Rouge and Lido cabaret clubs in Paris, including a caviar, lobster and champagne dinner, will also be off the table.

Instead, the city of Paris and UNESCO will be hosting a digital concert ‘Welcome to the Other Side’ inside the newly restored Notre-Dame Cathedral. The concert with French electronic music artiste Jean-Michel Jarre will be live-streamed for people celebrating at home.

The proposed surveillance measures notwithstanding, French social media has been abuzz with invites to clandestine parties. Such parties, involving gatherings of more than six people, have been taking place during the confinement over the weekends since October. Earlier in December, an intervention by the police in one such party at Marseille’s Bouches-du-Rhône found up to 500 maskless revelers. Similar parties were also held in Loire-Atlantique in Nantes Bas-Rhin in Strasbourg, Lille, Grenoble, Lyon, Saint Etienne and in Paris where police broke up at least three illegal gatherings.

The scientific council of the public health department, advising the government over COVID-19, has warned of the possibility of an uncontrolled resumption of the pandemic in the new year as it expects the compliance of surveillance measures for the year-end gathering to be “very uncertain.”

In an update on the pandemic situation on Dec. 22, the council grimly observed that “it is likely that such an increase in contamination will cause an uncontrolled resumption of the epidemic within a few weeks, a sharp increase, hospitalizations, intensive care placements and deaths.”

It further noted the restrictive measures in place since October considerably reduced the circulation of the SARSCoV-2 virus but “there has been no improvement in the epidemiological situation since the beginning of December and there is even a slight degradation.”

According to its recommendations, health authorities will be enforcing a 6 p.m. to 6 a.m. curfew from Jan. 2 in 20 departments of the high-risk regions of Grand Est, Auvergne-Rhône-Alpes, Provence-Alpes-Côte d’Azur and Bourgogne-Franche-Comté. The mayors of Nice, Metz and Nancy have however raised concerns with the rising number of cases and have called for local reconfinement instead of a limited curfew.