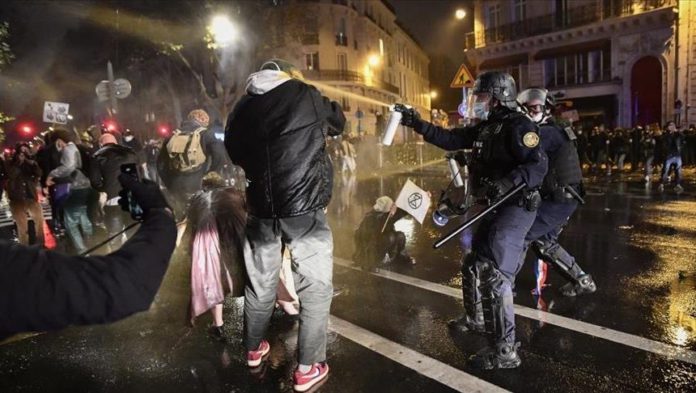 Soon after the beating of Black music producer Michel Zecler, followed by violent police action to clear a migrant camp in Paris, the passage of a controversial global security bill by the lower chamber of French Parliament, giving more powers to police, has raised hackles among journalists and rights groups.

On Nov. 21, four police officers beat Zecler and launched a tear gas canister into a music studio in the 17th district in Paris. A few days later, the French police violently dismantled a makeshift migrant camp in the heart of Paris, clashing with migrants and activists.

The police actions coinciding with the introduction of the global security bill have created a storm all over the country. The proposed legislation, approved by the lower chamber is awaiting a nod from the upper chamber or Senate. The bill offers more protection to police and is seen as a threat to freedom of expression.

Many groups from ordinary citizens to journalists and human rights groups are voicing concerns after the National Assembly approved the bill last Tuesday. These groups see this legislation against France’s highly cherished right to free speech.

Meant to supplement the 1881 law related to freedom of the press, Article 24 of the new bill prohibits taking photos of officers in the line of duty and distributing them unduly in the press.

The government says the provision will protect law enforcement agencies who are often harassed, and that disseminating images without consent could “cause harm to them physically or psychologically”.

The adoption of the legislation in the lower chamber has resulted in nationwide protests with thousands of people objecting, saying that it would protect police at the expense of the people.

“There is a real problem with police officers not being held to account,” says Judith Sunderland, acting deputy director of Europe and Central Asia Division for Human Rights Watch.

In June, Sunderland had authored a lengthy report entitled They Talk to Us Like We are Dogs: Abusive Police Stops in France, on the problem of racial profiling.

The report mentioned that in poor neighborhoods, where people of immigrant origins represent a significant part of the population, the police are using identity checks as a blunt instrument to exert authority.

According to Sunderland, racial profiling has become worse in France. She believes that police have the power to stop anyone for an “identity check” even if there is no suspicion of involvement in a crime or illegal activity.

“Random stops with no objective evidence to see what one can find is a waste of police resources. It creates grievances in the communities that they serve, too. It is a bad vicious cycle,” said Sunderland.

After intense protests, Prime Minister Jean Castex announced that Article 24 of the bill would be amended by an independent commission. This however raised the ire of numerous MPs, especially former Interior Minister Christophe Castaner, who expressed his “astonishment.” Castex then changed course saying that changes could only be incorporated by the parliament.

There were more protests on Nov. 28 when police arrested 81 people. Over 100 policemen were injured in Paris alone, forcing Castex and the interior minister to once again focus on the language of the legislation and the severity of the country’s institutionalized racism.

The beating of Zecler, in which four police officers have been indicted, has given more weight to the argument of protesters, who are apprehensive about giving additional powers to police.

According to Jacques de Meilleur, director of the Center for Sociological Research on Law and Penal Institutions, there is a palpable tension between law enforcement and the public they serve.

“The system needs to be completely re-assessed, beginning with practices on the ground and prioritizing good relations with the public and the proportionate use of force, “he told Anadolu Agency.

Meilleur, who is an expert on issues of policing, believes that racism does exist among law enforcement agencies largely. He argued that there was a need to protect the police, who are under tremendous pressure both keeping the peace and keeping supervisors happy.

“Visibility of law enforcement action is essential – and protecting their integrity is an issue – but Article 24 is a bad signal” he added.

On Monday, a civil magistrate in Paris indicted the four police officers for beating Zecler, charging them with “willful violence by a person holding public authority” and “forgery”.

The magistrate also found them lying on the incident in the report that they had filed. One officer was charged with resorting to intentional violence for throwing a teargas canister through the window of the music studio.

The entire event was captured on closed-circuit television, with the officers seen pushing Zecler into the studio and repeatedly punching and kicking him. Three days later, Interior Minister Darmanin suspended the four officers; two of them remain in jail and the other two were released on conditional release.

Addressing the National Assembly on Monday, Darmanin admitted the need for structural changes required in the police force, while protecting those who assist in the line of duty. He proposed increased training, additional supervisors, and also more funding. The minister promised to rewrite the language of the proposed legislation.

Speaking to Anadolu Agency, Pauline Ades-Mevel, editor-in-chief at Reporters Without Borders, said amending the bill was an utmost necessity.

“The article must be withdrawn and the protection of the police must not come to the detriment of journalists, nor hinder their work. Journalists are on the ground to provide information and the notion of intent to harm that they can be criticized for is too vague for the text to be acceptable. We ask for the text to be withdrawn, complete, “she said.

Sunderland also said that the bill is raising a lot of concerns among journalists and ordinary citizens, as it prohibits them to document police actions.

“It is very important to have those eyes on the law enforcement, “she added.