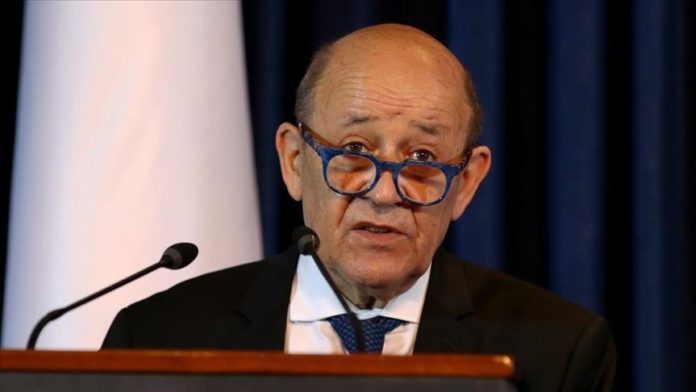 France is ready to intervene as a NATO partner on condition of reciprocity “if Turkey is attacked in its integrity,” said the country’s foreign minister on Friday.

The relations between Paris and Ankara have entered into “a phase of convalescence,” Jean-Yves Le Drian told an interview with local BFMTV.

Le Drian’s remarks came after a meeting between Turkish President Recep Tayyip Erdogan and his French counterpart Emmanuel Macron on Monday in Brussels on the sidelines of a NATO summit.

Welcoming the resumption of dialogue between the two countries, the French minister said he was also present in some part of the talks between the two leaders. He said a “verbal cease-fire” has been established between France and Turkey.

On Syria and Libya, Le Drian said the two countries “will begin to work together” in particular on “the Libyan question, especially on the [Haftar] militias.”

He said Paris and Ankara will also work together “on Syria where we sometimes have contradictory interests like shared interests.”

The minister concluded saying that he would like “the question of the Eastern Mediterranean and Cyprus” to be addressed.

Meanwhile, the Turkish Ambassador to France, Ali Onaner, interviewed on Radio Antenna Sud, stressed that “the dialogue resumed from March 2, when the two presidents spoke via videoconference after a period of tensions.”

Onaner noted that the links between France and Turkey go in the direction of “appeasement.”

Despite being NATO allies, France and Turkey have had confrontations and are on the opposing sides of conflicts in Syria, the Eastern Mediterranean, Libya, and the Caucasus.

Islamophobic policies in France also have negative impact on relations.