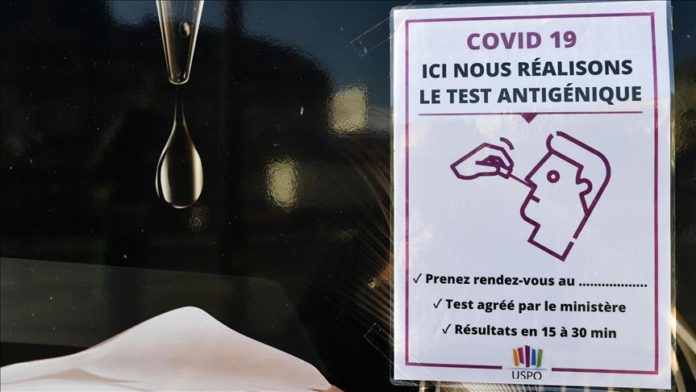 France reported a record daily number of new coronavirus cases Thursday, the highest number since the end of a national lockdown on May 11.

The numbers were announced by Director General of Health Jerome Salomon in an afternoon press conference given along with Health Minister Olivier Veran.

Hospitalizations were also climbing, with 19,248 reported and 2,936 of those patients remaining in intensive care. Some 99 departments throughout France remain in a vulnerable position with 3,042 clusters of infection considered serious.

Salomon went on the say that 2 million tests are carried out each week in France, with 20% of those tests coming back positive.

Veran predicted that the curve would fall in mid-November, but not until after an average 6,000 cases would be logged in the nation’s ICUs.

He called on the French to “pull themselves together in the face of bitterness, fatigue and legitimate weariness,” adding that not doing so will only lengthen confinement and make it “higher and longer than the first.”

Salomon added that more than 85% of France’s intensive care beds are occupied and that already 43 medical evacuations have been carried out over the past few weeks, which means patients moved to different hospitals where ICU beds are free.

Paris Mayor Anne Hidalgo added new restrictions in the capital Thursday, announcing that shops selling takeaway would need to close from 10:00 p.m. starting Friday night as gatherings were happening outside their doors.

Worldwide, the death toll from COVID-19 stands at 1.23 million since first being detected in Wuhan, China late December last year. The number of infections stands at over 48 million, according to the latest figures from US-based Johns Hopkins University.

France will enter week two of its second lockdown tomorrow.