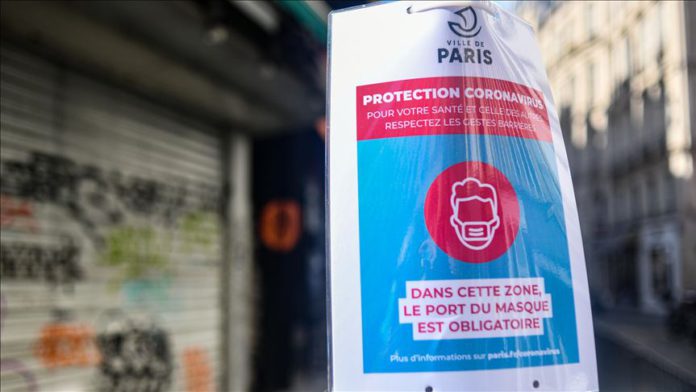 The latest figure took the country’s total number of infections to 809,684.

The sky-high figure of infections is proof that France is indeed in a second wave of the epidemic and justification for a set of stricter measures laid out this week by President Emmanuel Macron and Prime Minister Jean Castex.

In a televised interview Wednesday evening, Macron announced an official state of emergency to start from midnight Saturday, when a curfew will also begin, placed on 10 of France’s largest regions and cities where the virus is still actively circulating, including Paris, Ile-de-France, Lille, Grenoble, Lyon, Aix-Marseille, Montpellier, Rouen, Saint-Etienne and Toulouse.

Castex delivered a press conference Thursday laying out details of the new health protocols, He was joined by the ministers of health, labor, interior and economy.

All private parties and gatherings using public spaces will be banned, including weddings and engagement parties. A “rule of six” applies in that gatherings must be limited to no more than six people.

Restaurants will also allow no more than six customers per table and must record each person’s name and phone number in case contact tracing needs to be carried out.

Universities and higher education establishments will follow suit in permitting no more than 50% of students to meet, for class or otherwise.

Entities excluded from the curfew are medical establishments, hotels, restaurants, home delivery companies and public establishments obliged to stay open at night, such as police and fire stations.

“The measures must be applied with common sense,” said Castex. “Some trips will be allowed, as for health reasons, to go to the hospital or a pharmacy, or for professional reasons.”

Walking the dog will be possible as well, he added, but with a certificate.

Interior Minister Gerald Darmanin announced the mobilization of 12,000 police and gendarmes and advised that proof of employment must be presented if out for work reasons. Violators will face a €135 (US$158) fine. Repeat offenses could garner a fine as high as €3,750 (US$4,390) or six months in prison, depending on the offense.

Finance Minister Bruno Le Maire announced that the country’s solidarity fund for companies to help them deal with the coronavirus crisis would be extended to hotels, cafes and restaurants. Exemption from employers’ social security contributions will also apply for certain companies.

Le Maire also announced a six-month extension of the state guaranteed loan scheme and has asked the French Banking Federation for an extension of a year for companies to pay back loans already borrowed.