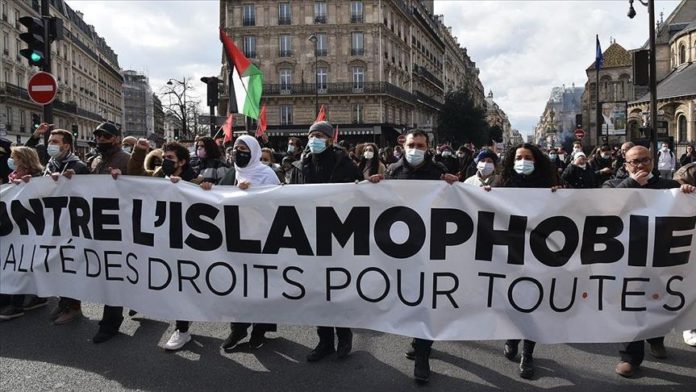 Protests continued across France on Sunday against Islamophobia and a controversial bill that has been criticized for targeting Muslims.

“The French government has targeted Muslims, even Islam, and is interfering with Islamic practices. This is too much. We condemn the [government’s] colonialist and neo-colonial approach,” Omar Slaouti, the organizer of the demonstration, told Anadolu Agency.

Slaouti said the protests will continue against the “separatism” bill.

Speaking on the French government’s aims with the controversial bill, he said: “There are two strategies. The first one is that there are economic, social, health and environmental crises, however, [French President Emmanuel Macron] cannot find a solution for them. On the contrary, he deepens the social inequalities.”

Noting that Macron directs rage at one group of society, he said the president’s second strategy is making the rich richer.

“He wants this system to be more unequal. We condemn his liberal and racist policies that deepen the inequalities,” he said.

Slaouti added that they would not allow the use of racist and Islamophobic remarks to attract more votes for the presidential election next year.

Ismael al Hajri, one of the protesters, said: “We are against all the attacks of Islamophobic policies carried out by the government for 10 years. This is a bill that restricts freedoms and will result in further discrimination against women with headscarves and Muslim women [in general].”

It was introduced by President Macron last year to fight so-called “Islamist separatism.”

The bill is being criticized because it targets the Muslim community and imposes restrictions on almost every aspect of their lives.

It provides for intervening in mosques and the associations responsible for their administration as well as controlling the finances of associations and non-governmental organizations belonging to Muslims.

It also restricts the education choices of the Muslim community by preventing families from giving children a home education.

The bill also prohibits patients from choosing doctors based on gender for religious or other reasons and makes “secularism education” compulsory for all public officials.