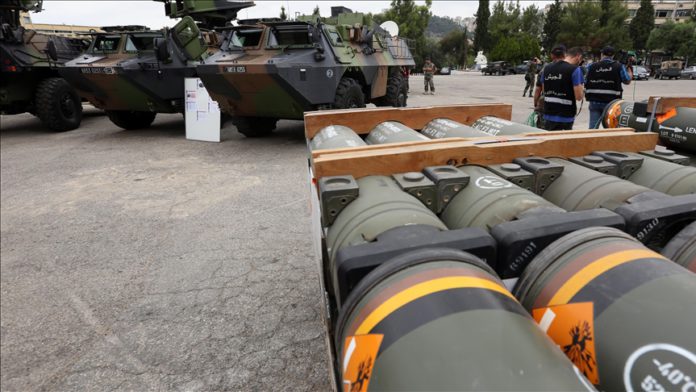 An online petition calling for parliamentary control and transparency over France’s arms sales has been signed by more than 100,000 people in a few hours.

“Mr. Macron, we demand transparency and control over France’s arms sales!” it says.

It says France has “pledged not to authorize arms transfers if there is a significant risk that these weapons will be used to commit or facilitate serious human rights violations.”

“Yet France exports arms to Egypt, which is experiencing unprecedented human rights repression,” the petition says.

“It is also one of the first suppliers of military equipment to Saudi Arabia and the United Arab Emirates, members of the coalition engaged in Yemen and responsible for thousands of civilian casualties.”

It also says that with “the absence of any real parliamentary control [over arm sales], no one is in a position to ensure that France respects its international commitments.”

“We must put pressure on France so that it shows more transparency and better control over this trade like no other!”

The petition came about after Macron said Monday during a visit to Paris by Egypt’s President Abdel Fattah al-Sisi that he would “not condition matters of defense and economic cooperation on these disagreements [over human rights].”

Several NGOs object to the three-day state visit by al-Sisi, and at least 20 organizations are scheduled to stage a demonstration in front of the National Assembly Tuesday evening.

Plans to bypass parliamentary control over arms sales were made public by Disclose, an investigative website, after obtaining a government note classified “confidential defense.”

The note “reveals the STRONG and DEFINITIVE opposition of the government to any parliamentary control over arms sales, in particular to protect buyer countries,” according to an Amnesty France tweet.

The note “reveals the government’s strategy to torpedo the proposals of a parliamentary report on a more democratic control of arms exports,” said the article by the Disclose, which published parts of it.

In 2017, France sold €1.4 billion ($1.7 billion) worth of arms to Egypt, positioning Paris above the US as the country’s chief arms supplier.

There has been growing criticism of Egypt’s human rights record under al-Sisi, who came to power in 2013 after toppling the country’s first democratically elected President Mohamed Morsi in a military coup.

The petition was signed by 109,312 people until the early hours of Tuesday.