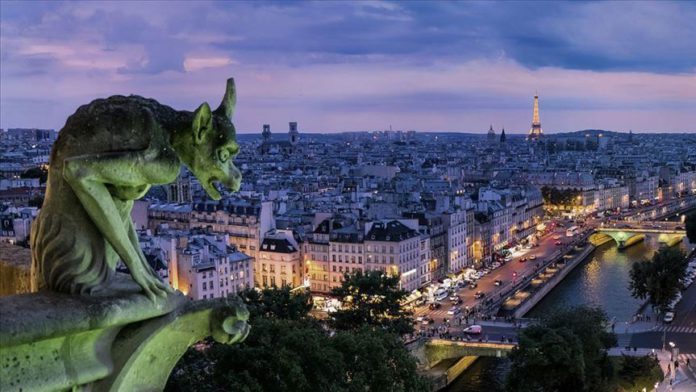 France has launched an anti-terrorism probe into a knife attack Friday near the former headquarters of satirical magazine Charlie Hebdo in Paris.

The National Anti-Terrorism Prosecutor’s Office has taken over the investigation into “attempted assassination in connection with a terrorist enterprise, criminal terrorist association,” an official statement from the office said.

Two people were critically wounded, although the wounds are non-life-threatening, according to police statements on Twitter.

The two wounded — one male and one female — are employees of the audio-visual company First Line, whose offices are housed in the former Charlie Hebdo headquarters. It is not yet clear but the attack was reportedly carried out using a meat cleaver.

Two suspects were arrested, one male of Pakistani origin near the Place de la Bastille, and one 18-year-old male in the Richard-Lenoir metro. Both arrests were made in Paris’s 11th arrondissement. Two assailants reportedly remain on the run.

“I want to say to the entire nation that we are doing our best to find out what happened,” said the premier. The National Anti-Terrorism Prosecutor’s Office has been called in because of the timing of the attack — as you all know, the current court case is underway over the 2015 attacks.

“The two men who were injured were clearly targeted; they were merely taking a cigarette break,” Castex concluded.

The prime minister reassured that the two assailants have been arrested and are currently in police custody. He added that the Interior Ministry will take over the case.

Meanwhile, the staff of Charlie Hebdo put out a statement immediately in support of those injured in the “odious” stabbing attack.

A suspicious package was found in the area of rue Nicolas-Appert on which the former offices sit. No explosives were found in its contents.

Thousands of schoolchildren in 125 surrounding schools were immediately put on lockdown in their classrooms as a precautionary measure. The lockdown was lifted as of 3.15 p.m. (1315GMT), with the police declaring the situation as secured.

Law enforcement have warned the public to avoid the area. Metro stations have been evacuated and closed until further notice.

Thousands of suspects remain on terrorism watch lists in France. Friday’s attack occurred as trials take place in Paris over the 2015 terror attacks at Charlie Hebdo, the satirical newspaper that published cartoons of the Prophet Muhammad.

Their publication ignited a three-day reign of terror by extremists who killed 17 people, 12 of whom were at the Charlie Hebdo offices.

Madagascar slams WHO for not endorsing its herbal cure