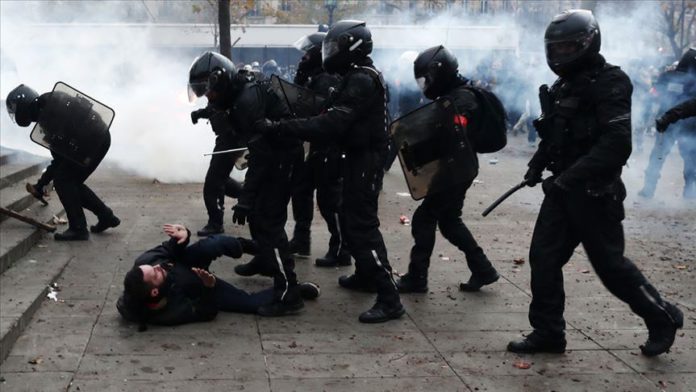 Amnesty International on Saturday accused the French government of not being the “champion of free speech that it likes to think it is,” criticizing recent rhetoric by the government as “shameful hypocrisy.”

“The French government’s rhetoric on free speech is not enough to conceal its own shameless hypocrisy,” said Marco Pirolini, a researcher in the rights group, adding that freedom of expression “means nothing unless it applies to everyone.”

He accused French President Emmanuel Macron and his government of doubling down on a “smear campaign” against French Muslims over the murder of Samuel Paty, a French teacher who was brutally murdered in mid-October.

“[They] launched their own attack on freedom of expression,” said Pirolini, citing recent incidents such as the hours-long questioning by French police of four 10-year-old children on suspicion of “apology of terrorism.”

He also referred to a court ruling on two men for “contempt” after they burned an effigy depicting Macron during a peaceful protest, as well as a bill being discussed in parliament that would criminalize the use of images of law enforcement officials on social media.

“It is hard to square this with the French authorities’ vigorous defense of the right to depict the Prophet Mohammed in cartoons.”

He stressed that Muslims’ freedom of expression and religion usually received scant attention in France under the guise of Republican universalism, underlining that in the name of secularism, Muslims in France were banned from wear religious symbols or dress in schools and public sector jobs.

“France’s record on freedom of expression in other areas is just as bleak. Thousands of people are convicted every year for ‘contempt of public officials’, a vaguely defined criminal offence that law enforcement and judicial authorities have applied in massive numbers to silence peaceful dissent,” Pirolini added.

“In June this year, the European Court of Human Rights found that the convictions of 11 activists in France for campaigning for a boycott of Israeli products violated their free speech,” he said.

Pirolini criticized recent moves by authorities to dissolve organizations and close mosques on the basis of the “ambiguous concept of ‘radicalization.’” He also accused the government of conflating “radicalization” with the actions of devout Muslims.

“The government’s free speech campaign should not be used for covering up the measures that put people at risk of human rights abuses including torture,” he said.

Tensions further escalated after middle school teacher Paty was murdered and beheaded on Oct. 16 in a Paris suburb in retaliation for showing his students blasphemous cartoons of the Muslim Prophet Muhammad during a class on freedom of expression.

Insulting cartoons by the French weekly magazine Charlie Hebdo were also projected on buildings in some French cities.

Macron defended the cartoons, saying France would “not give up our cartoons,” sparking outrage across the Muslim world.