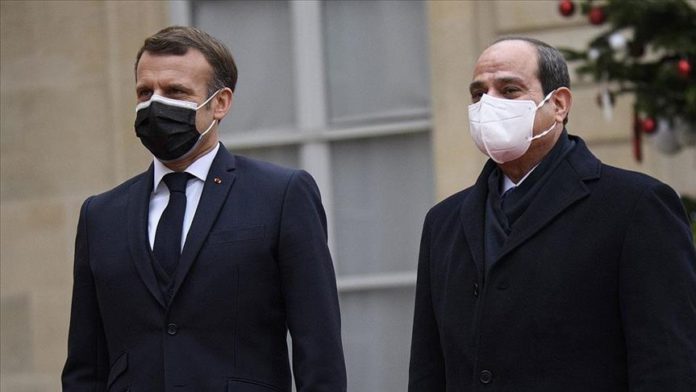 Several NGOs are objecting to a three-day state visit by Egyptian President Abdel Fattah al-Sisi to France on Monday.

Al-Sisi was received by French President Emmanuel Macron Monday morning at the Elysee Palace and accompanied by an escort on horseback, according to reporting by Le Monde. Al-Sisi officially landed in Paris on Sunday.

Around 20 organizations are setting a demonstration in front of the National Assembly for Tuesday evening.

The presidents discussed several pressing matters and regional crises, most particularly drilling rights in the Mediterranean, ongoing tensions in Libya, and terrorism threatening the region.

The Egyptian leader will also meet with President of the National Assembly Richard Ferrand and Mayor of Paris Anne Hidalgo. Tuesday, he will lay a wreath at the Tomb of the Unknown Soldier under the Arc de Triomphe as well as meet with Prime Minister Jean Castex and Senate President Gerard Larcher.

The International Federation of Human Rights has taken the lead in criticizing the meeting. Antoine Madelin, an official with the body, cited continued human rights violations, especially when Macron has already acknowledged flaws in Egypt’s handling of such.

“We are amazed that France is rolling out the red carpet for a dictator when there are more than 60,000 prisoners of conscience today in Egypt,” Madelin expressed. The organization and others have called for the release of those being unfairly detained.

The backstory of Jan. 27, 2019 bears this out when Macron made much-publicized comments regarding the imprisonment of “bloggers, journalists, and activists” and that Egypt was not evolving “in the right direction.” The French leader plans to revisit the matter in his talks with the Egyptian head of state.

One factor in France’s favor and possible leverage: the sale in 2017 of €1.4 billion (over $1.7 billion) worth of arms to Egypt, which eclipsed the US as the largest arms dealer to the country.

The release on Dec. 3 of three leaders of the Egyptian Initiative for Personal Rights, a human rights organization, could also prove an asset for France. Their arrest in November caused an uproar in the Republic as well as other territories.

There has been growing criticism of Egypt’s human rights record under al-Sisi, who came to power in 2013 after toppling the country’s first democratically elected President Mohamed Morsi in a military coup.

Bangladeshi dies from coronavirus in UK