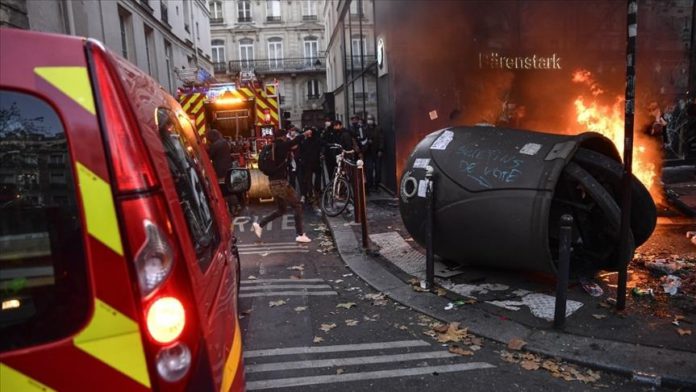 France’s controversial bill on global security would be incompatible with international human rights law, and should be comprehensively revised, human rights experts reporting to the UN said Thursday.

“It is a good sign that members of the Parliament have said they will rewrite Article 24 restricting the publication of images of police officers, but it needs to go further and rethink the purpose of the bill as a whole,” the experts said.

“Simply rewriting Article 24 will not solve its flaws, and the provision is certainly not the only one that infringes on fundamental human rights.”

They said that approval of the draft “global security law” by the National Assembly last week prompted tens of thousands of people to protest in cities all over France.

Four police officers have been charged in connection with that incident.

“These are very timely reminders that images of police abuse captured by the public play a vital role in oversight of public institutions, which is fundamental to the rule of law,” said the experts.

“Among many other provisions in the bill that could limit human rights, Article 22 permitting the use of drone surveillance in the name of security and counter-terrorism would permit widespread surveillance, in particular of demonstrators,” they noted.

“This has serious implications for the right to privacy, freedom of peaceful assembly, and freedom of expression in the country – as well as in any other country that might be inspired by this legislation,” they added.”

While welcoming the establishment of a commission led by the president of the National Human Rights Commission to formulate recommendations to Article 24, they urged the authorities to undertake a comprehensive evaluation of the whole bill’s compatibility with international law.

The experts have previously expressed their concerns regarding the law to the French authorities and reiterate their availability to provide any technical assistance the authorities may require in this context.

Italy votes on a new president: Draghi, Berlusconi or…?