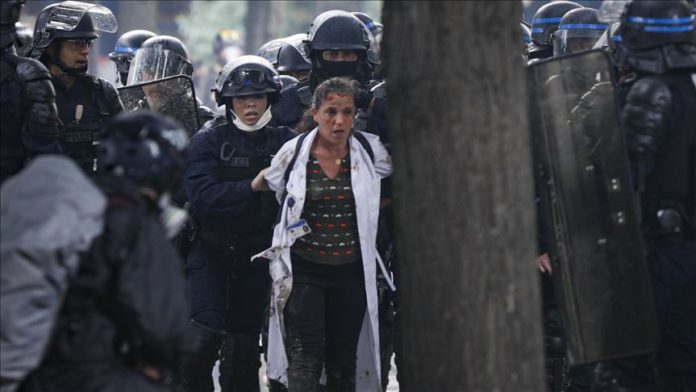 Demonstrations in Paris turned violent on Tuesday when healthcare workers ended their hours-long protest at Invalides, where a large group of protesters set furniture and cars on fire with police responding with tear gas.

More than 220 protests were planned for Tuesday across the country by nurses, doctors, caregivers and hospital personnel protesting to remind President Emmanuel Macron about some measures he promised in a program known as the Segur de la Sante, unveiled in late May promising to equip the healthcare sector with improved working conditions, pay and equipment.

In Paris, the crowd, comprised of an assortment of trade unions, came together in the afternoon to march from the Ministry of Health, towards the National Assembly and Invalides.

A few hours in, the situation began to deteriorate as the protesters arrived on the Invalides esplanade, where a few hundred people, dressed head-to-toe in black, set fire to vehicles and street furniture and proceeded to throw projectiles at law enforcement, all the while shouting: “Everybody hates the police.”

Police fired tear gas on the crowd to quell the violence, which came under control several hours later.

The events came in the aftermath of France’s months-long battle against the novel coronavirus. Since the start of the outbreak, the virus has killed 29,547 in the country with cases standing at 157,716.

Hospitalizations dropped on Tuesday to 10,490, down by 217 patients since Monday. The number of intensive care patients fell to 820, declining by two compared to the previous day.

The country also confirmed 42 daily deaths, over 30 on Monday. The total number of fatalities to date in hospital is now 19,090, with those in nursing homes standing at 10,350.

The statistics were reported by France’s Ministry of Health.

Despite the severity of the virus, most people experience mild symptoms and recover. Since the beginning of record-keeping for the disease, 73,325 people have recovered in France from the virus.

After originating in China last December, COVID-19, the disease caused by the coronavirus, has spread to 188 countries and regions across the world. The US and Brazil are currently the worst-hit regions.

The pandemic has killed almost 440,000 people worldwide, with total infections exceeding 8 million, while over 3.9 million people have recovered from the disease, according to figures compiled by the US-based Johns Hopkins University.