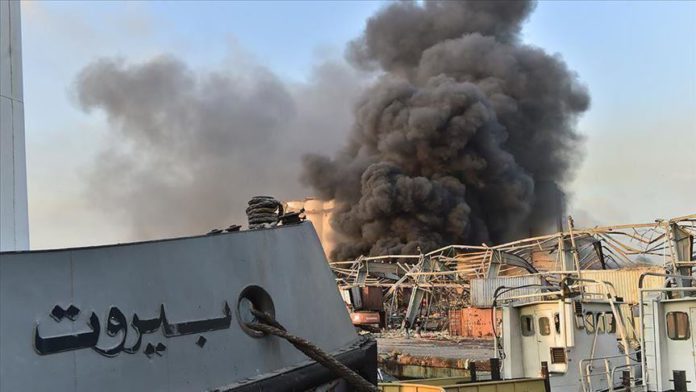 Massive explosions that rocked Beirut on Aug. 4 made headlines around the world, with Hiroshima-like visuals that seemed hard to fathom.

France, led by President Emmanuel Macron, rushed to the rescue of the ailing nation — with supplies, crisis and health care workers, and strong leadership.

But why the immediate moves? Were Macron’s actions a result of a shared history or a view on the future?

Two enormous blasts erupted in the Port of Beirut after a neglected stockpile of 2,750 tons of ammonium nitrate stored in a warehouse was left for more than six years to decay and then ignited by fireworks stored in the same facility.

The chemical compound is often used in bombs and fertilizer.

The explosions injured 19 French citizens and claimed the lives of two, including famed architect Jean-Marc Bonfils.

It also shattered buildings for miles, bringing Beirut, and Lebanon — a country already on the brink of bankruptcy and plagued by nonstop corruption — to its knees. A total of 181 people died, 6,000 injured, and 300,000 were left homeless by blasts that registered 3.5 on the Richter scale.

The following day, France sent two military planes with 18 tons of medical equipment and 700 tons of food to the stricken capital, along with doctors and relief workers.

The following Sunday, he led a virtual international donors conference to aid Beirut. More than a dozen world leaders pledged €250 million ($300 million), which would be funneled through the UN directly to victims rather than through Lebanon’s government.

On Aug. 10, Lebanon’s Prime Minister Hassan Diab and his Cabinet resigned. Arrests and investigations have since been made of port and government officials.

Addressing the outrage, Macron said: “It’s up to the authorities to act so that the country does not sink.”

French Foreign Minister Jean-Yves Le Drian had also visited Beirut in late July. “Help us help you,” he said while discussing needed reforms to save the country from collapse.

Lebanon’s problems are catastrophic: A crippled banking system, currency — not to mention an economy — in free fall, rampant inflation, unreal poverty, and skyrocketing unemployment. The devastating blasts were like a cruel punchline after months of protests by a people in despair.

In an interview with RTL radio, Le Drian reiterated his grave concern, saying a new government must be formed immediately.

“There is an emergency, both a humanitarian and a health emergency, and political if we want this country to hold. We risk today the disappearance of Lebanon,” said Le Drian.

The country possesses a sovereign debt that is 170 times that of its GDP. Stories of thousands losing jobs and businesses shuttering daily are plentiful.

Suicide is not uncommon in a country teetering on the brink.

Lebanon already defaulted on its debt in March and in May started discussions with the International Monetary Fund (IMF). Talks hit a stalemate after two top government officials resigned.

According to reporting by France24 TV, Lebanon’s leadership said it requires more than €20 billion ($24 billion) to be in the clear, despite Aoun promising around $66 billion in the wake of the explosions.

A 2018 Paris donors’ conference garnered €11 billion ($13 billion). The funds were never delivered after Lebanon fell down on promised revisions.

But the reasons for France’s involvement go deeper than mere altruistic concern.

The two countries have a long history dating to the collapse of the Ottoman Empire after World War I and starting with the League of Nations Mandate in 1920, which assigned France as an administrator, steering the then-five provinces into self-governance.

Although not formally a colony, the burgeoning nation was in essence just that, due to France’s role as trustee — along with neighboring Syria — until both countries’ independence in 1943 and France’s total withdrawal in 1946.

But in his visit to a city that’s been called “the Paris of the Middle East” where French is officially the second language, Macron vowed to support.

“France will never let Lebanon go,” he professed. “The heart of the French people still beats to the pulse of Beirut.”

Macron realizes the tangled web that is Mideast relations requires entree, one which France can access more readily now, through a historic ally and now-desperate sidekick. With power players galore jockeying for position in the region, Lebanon holds a sphere of influence that is appropriately agape.

In an Aug. 11 piece for Foreign Policy, Hanin Ghaddar, a Middle East expert, calls Macron a man, whose push for a national unity government will only “maintain the status quo”.

“The Lebanese need a more drastic solution. The government’s resignation will not change the system as long as the same political elites maintain their power and control over other institutions,” Ghaddar wrote.

Lebanon’s government is a pastiche of 18 recognized religious groups and politicians. A parliamentary democracy where the office of president must be held by a Maronite Christian; prime minister a Sunni Muslim; speaker of parliament Shia Muslim, and the deputy speaker Eastern Orthodox. The parliament must be held equally by Christians and Muslims.

The Shia Islamist faction of Lebanon’s government is maintained by Hezbollah, the political group whose military arm is deemed a terror organization by the EU.

Other critics see Macron’s pledge to rebuild Beirut as a neocolonialist one.

“France’s Macron has huge internal problems. Better he focuses on them rather than trying to play little Napoleon,” tweeted Ali Bakeer, a political analyst on MENA affairs.

Whether it is a foothold the French president seeks in a facile Middle Eastern territory is up for debate. Jack Lang, the head of the Arab World Institute in Paris, views the link between the nations as endearing.

“The ties between Lebanon and France dictate to French officials this duty of presence, which is not interference but assistance, solidarity, the expression of friendship to France and for the Lebanese people we love,” he said.

But Lang also understands the gravity of the situation.

“We are walking on the edge of a precipice. We have to aid, support, and encourage the Lebanese people, and to find new, intelligent solutions,” he added.

Another complex issue is France’s position in the Eastern Mediterranean, where the recent discovery of gas resources prompted Macron to send navy vessels in joint military exercises with Greece, Italy, and Greek Cypriot administration, to the dismay of Turkey who is already conducting exploration in the region.

A population fed up with its leadership though welcomes France’s involvement, so much so that an online petition requesting a temporary restoration of the French mandate circulated in the week after the blast, garnering 60,000 signatures.

Macron has already sent a concept paper to Lebanon outlining the financial and political changes needed to instill the pledged foreign aid. He will again visit Beirut on Sept. 1 to discuss the formation of a new government and implementation of reforms.

Aoun will convene Monday with parliamentary factions to choose a new prime minister.