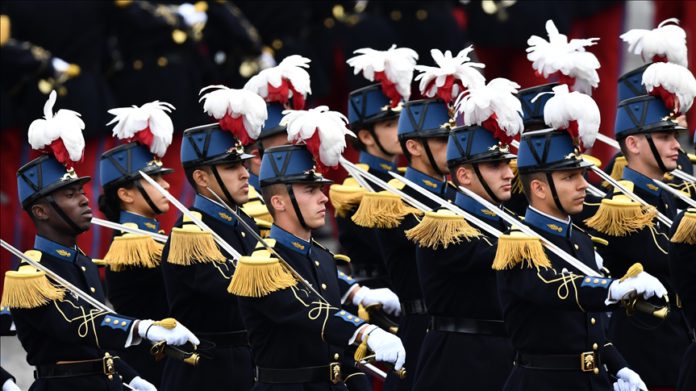 France on Wednesday held low-key national day celebrations of July 14 with the traditional annual military parade at the Champs Elysee in Paris due to bad weather and health restrictions, a year after the Bastille Day commemorations were cancelled due to the COVID-19 confinement.

President Emmanuel Macron and first lady Brigitte Macron attended their last parade on Wednesday before the end of the head of the state’s five-year term, alongside Gen. Francois Lecointre, who recently announced his resignation as the head of the General Staff of the Armies.

The national day commemorates the storming of the Bastille prison in 1789 at the start of the French Revolution. This year’s celebration was held under the motto “Winning the Future,” encompassing confidence, recovery, and power to overcome the health crisis-related difficulties.

The parade was launched by the French troops of the Takuba task force deployed in the Sahel to fight the extremist forces, marching down on the Avenue des Champs Elysees. France has announced ending Operation Barkhane and the scheduled withdrawal of its military engagement in the Sahel and takeover by the Takuba forces involving several armies of European countries.

In his speech on the eve of the Bastille Day, Macron referred to the success of the French army and Operation Barkhane which he hailed for “preventing the constitution of a territorial caliphate in the Sahel.”

“Without our armies, all or part of this region would have fallen into the hand of jihadism, terrorism, with a duly organized terrorist state. Our armies have prevented it.”

The military parade also included motorized and mounted troops, soldiers in the space command, the cavalry regiment of the Republican Guard, and the famed Patrouille de France aircrafts releasing the smoke in French tricolors. A total of 5,000 participants, including 4,300 soldiers on foot, 73 planes, 24 helicopters, 221 vehicles, and 200 horses took part in the parade.

For the first time, the municipal police from the southern city of Nice participated in the parade in Paris for its action during the Oct. 29 terror attack in the Nice Cathedral. The city was the site of a major terror attack in 2016 claimed by Daesh/ISIS after a crowd assembled to watch the Bastille Day fireworks at the Promenade de Anglais was mowed down by an attacker in a truck, killing 86 people. Prime Minister Jean Castex visited Nice to pay tribute to the victims and lighted 86 candles during the memorial ceremony.

Due to the ongoing pandemic and bad weather with heavy rainfalls in many parts of the country, the celebrations were subdued. The city of Lyon canceled the traditional fireman’s balls along the quays of the Saone river and firework shows around the country may be held depending on the weather.

Mexico to take over criminal probe of ex-security chief