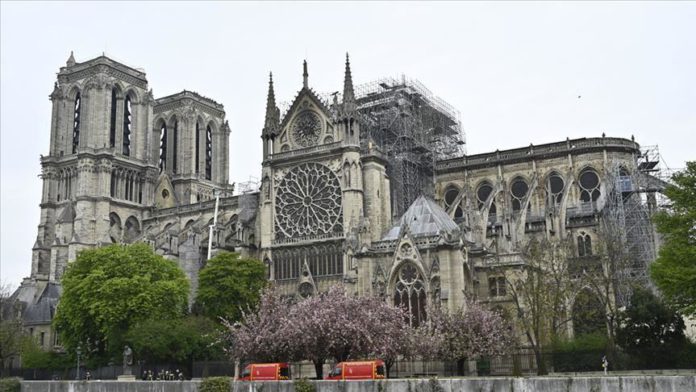 Four Greenpeace activists climbed atop an 80-meter-high crane outside Notre Dame on Thursday to affix a banner that read: “Climate: Take Action!”

The dramatic step by the group was taken to denounce President Emmanuel Macron’s inaction on climate change in the country.

Another activist hung off the boom of the crane and held a banner declaring: “Climate, Macron, Notre-Drama.”

Notre Dame Cathedral is currently a construction site as repair work is being performed on the iconic house of worship. Last April, an inferno almost engulfed the 12th century church and French landmark. The blaze — whose cause is still unknown — started in the rafters and consumed the roof until almost 400 firefighters doused it just over four hours later.

Greenpeace Director General Jean-Francois Julliard picked the giant crane outside the cathedral, knowing it was a place that the group’s communique would not be missed.

“We chose Notre-Dame-de-Paris because it is an emblematic monument of Paris, emblematic of France. This is an opportunity to send a strong message to all French people and even across borders because everyone knows this monument,” he said.

“We hear a lot Emmanuel Macron announcing and promising, but in the acts, reality does not follow,” he declared.

Iran: COVID-19 pandemic under control in many provinces