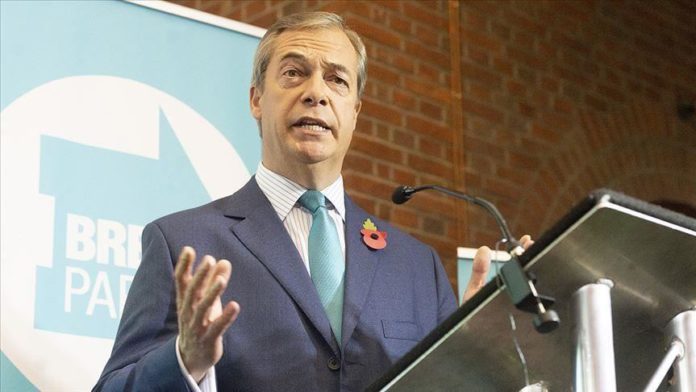 Farage posted a video on Twitter of himself in a boat on the edge of Britain’s territorial waters, and videoed a vessel so packed with migrants that the small boat was pushed down and water lapped over its edges.

“The truth of it is this is a massive criminal enterprise making vast sums of money,” Farage said in the video.

“You can see the boats absolutely packed, all being charged a minimum of 5,000 Euros each by the criminal gangs to make this crossing.”

“You can’t believe when you see how close the water is to the edge how massively overcrowded this is,” he said.

He then turned his attention to France: “We’re now going back in to French waters. What we know is that a French naval vessel has been seen escorting boats out of French waters, then they’re off their hands.”

“The big French naval vessel has now gone – they’ve done their job. They’ve brought, escorted that little dinghy into British waters. They’ve now left their own RHIB (Rigid Hulled Inflatable Boat) of that vessel just to make sure they’re safe until the handover to the Border Force,” he said.

“They’re even trying to prevent us filming it with the French naval vessel trying to get in the way of the handover. We’ve just been told by UK Coastguard that they will commandeer this vessel if we film the handover between the French Navy and the British Border Force.”

Farage spoke to the Daily Mail, and accused the government of hiding the true number of migrants. He said the Home Office told him five boats had been intercepted the day before, but he had seen another unreported boat.

“Why was this boat not listed in the official figures. There is a suspicion that they are not giving us the true figures,” he told the Daily Mail.

“We counted 22 migrants on that boat and they have not been included in the Home Office figures. I believe the Government are hiding the true number of migrants making it to the UK.”

A spokesperson for the Home Office said: “These remarks are completely untrue. Border Force intercepted five boats that day. The one “spotted” by Mr Farage was already on our radar when he called it in and was included in the figures we gave out.”

Farage’s tweeting of his investigative exploits provoked a social media backlash for, among other reasons, breaking nationwide lockdown restrictions.

Chris Philp, a justice minister, said: “We are working tirelessly with the French to stop these illegally-facilitated crossings, sharing criminal intelligence with the NCA (National Crime Agency) and French authorities. And a substantial French law enforcement deployment last weekend prevented over 100 migrants from making the crossings – with the French also stopping migrants today.

“Migrants should not risk their lives leaving a safe country and we will look return those who did today where possible.”

Farage said: “It is just outrageous after all the money we have sent to France to deal with this problem that the French Navy now escort illegal migrants into UK waters.”

International law prevents Britain and France from turning the boats around, and naval vessels from both countries shadow the vessels in case they run into difficulties. They cannot intervene with the boats unless invited to do so.

There has been a noticeable increase in migrants reaching the UK, according to the statistics.

The Daily Mail reported that 1,520 migrants have reached the UK this year. 1,890 reached the UK in all of 2019, and of those who arrived this year, 1,149 of them arrived since the UK entered lockdown.

May saw 531 migrants reaching the UK, a record that beat the record set only the previous month in April, when 523 migrants reached Britain.