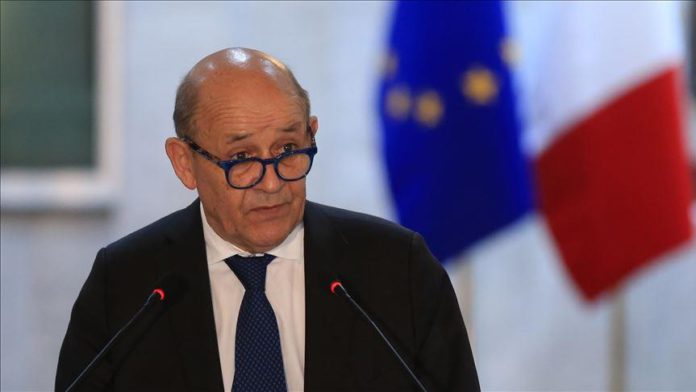 “From the Chinese region of Xinjiang we have received testimonies and corroborating documents, which describe unjustifiable practices against the Uighurs and a system of surveillance and institutionalized repression on a large scale,” said French Foreign Minister Jean Yves Le Drian at the ongoing UN session in Geneva which he attended via video link.

As a voting member at the council, France also raised the regression of human rights in Russia, particularly highlighting the assassination attempt on opposition figure Alexey Navalny, who is currently in prison; violence in Belarus; the civil war in Syria; the armed conflict and famine in Yemen; and the military coup in Myanmar.

China has denied rights abuse of the Uighur Muslims, despite mounting evidence gathered by international rights groups against Beijing.

The Chinese Embassy in Paris in a series of tweets termed the acts of “genocide”, “forced labor”, “forced sterilization”, “systematic rape and torture” as “lies” and “more than absurd.”

“These lies are the tools of the Western anti-Chinese forces to demonize China. It is insulting the 1.4 billion Chinese, including the 25 million multiethnic inhabitants of Xinjiang!” one of the tweets read.

On the testimony of Gulbahar Haitiwaji, a French resident of Uighur origin, who was imprisoned and sent to a re-education camp, the embassy posted another set of tweets stating: “Instead of being grateful to Chinese justice for its leniency, Haitiwaji no longer hid her separatist and terrorist character and concocted so-called ‘suffering’ in China.”

In her book, Survivor of the Chinese Gulag, Haitiwaji recalls the nightmare endured during her three-year imprisonment and narrates the first-hand account of torture as well as witnessing the physical and psychological ordeal and surveillance by the authorities in the camps. She also writes about the forced inoculation of women in the camps after which they stopped menstruating. “I, who already stopped having my period, tried to reassure them. But deep inside, a terrible thought already began to take shape: Are they sterilising us?” an extract from the book reads.

The Chinese Embassy in its tweet said: “[Haitiwaji] visited relatives and friends and traveled to Urumqi, Karamay, Ili, Altay and other places, where does detention and torture come from? What is even more grotesque is that she claims to have been ‘sterilized’. At 55?.”

Reportedly, she was pronounced innocent and allowed to leave Xinjiang, an autonomous region of China where the Uighurs live, following diplomatic intervention by France. She returned to Paris last year.