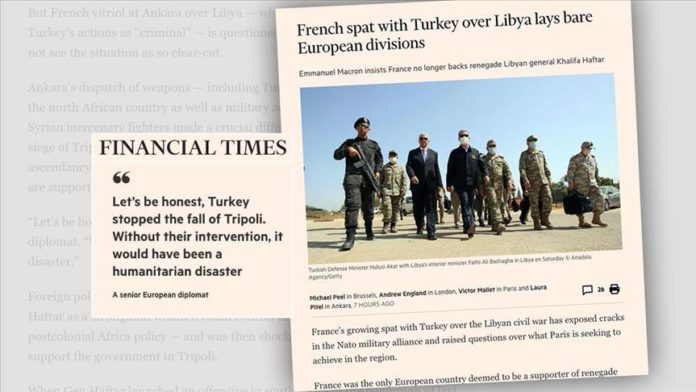 France has come to realize that warlord Khalifa Haftar in Libya is a “liability,” according to the Financial Times on Monday.

France was the only European country to back Haftar against the internationally-recognized government in Tripoli, which has recently been boosted by Turkey’s support that has changed the course of the civil war there.

Haftar appeared to be on the winning side until Turkey extended its support to the Libyan government which turned the tide against him.

This came after Turkey’s recent political and security cooperation agreements with the Libyan government which led to Haftar’s forces being pushed back.

One experienced western diplomat told the FT: “The French have realised Haftar has become a liability and not an asset any more.”

“I believe they are embarrassed because once again they made a mistake. Faced with this mistake, they have to justify it and they blame Turkey,” the diplomat said.

The spat between Turkey and France over the Libyan civil war has “exposed cracks in the NATO military alliance,” the FT said.

In an effort to defend its oil interests and fighting terrorists in the Sahel region, France sided with the UAE in backing Haftar, Tarek Megerisi, policy fellow at the European Council on Foreign Relations, said.

“France has different interests to Germany and Italy in Libya and it has moved to protect these interests,” he told the FT.

Haftar had attempted to militarily seize the Libyan capital Tripoli, in a brazen move backed by France.

One senior European diplomat told the FT: “Let’s be honest, Turkey stopped the fall of Tripoli.”

“Without their intervention, it would have been a humanitarian disaster,” the diplomat said.

But France always had difficulty in defending and promoting its backing of Haftar. Other NATO and European countries had always seen Haftar as the aggressor, and the main obstacle to a political solution.

Dorothée Schmid, a Middle East expert at Ifri, the French foreign relations institute, told the FT: “France is rather isolated in this affair.”

Turkey has stressed the need for a political solution in Libya, decrying efforts by Haftar to oust the country’s legitimate government.

December 3, 2019
We use cookies to ensure that we give you the best experience on our website. If you continue to use this site we will assume that you are happy with it.Ok