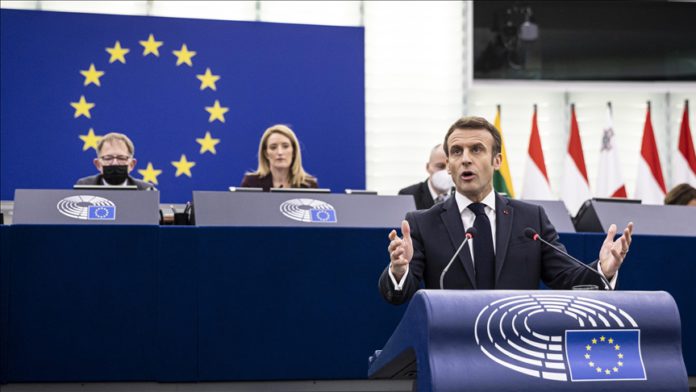 French President Emmanuel Macron urged EU countries on Wednesday to define the bloc’s “own doctrine of security” and discuss it with Russia.

“In the next few weeks, we must build a European proposal on order and principles-based security, share it with our allies in NATO, and then submit it to discussion with Russia,” Macron said during a plenary session of the European Parliament in Strasbourg, France.

Macron attended the plenary to present and discuss with EU lawmakers the priorities of the French government, which will chair the meetings of EU ministers at the Council of the European Union for the next six months.

He stressed that France, as president of the Council, wants to finalize the discussions “defining the doctrine of our own security.”

“The end of the rule of law is the beginning of authoritarianism,” he said, warning that “various authoritarian powers on our borders” are taking a fight against democratic values and “it is affecting many of our countries.”

According to Macron, the rules-based European interpretation of security must encompass the principles that Russia signed up to 30 years ago, such as the rejection of spheres of influence, territorial integrity of states, the inviolability of borders, and states’ freedom to choose alliances.

He said France, along with Germany, would continue talks with Russia in the so-called Normandy format to ensure the implementation of the Minsk Agreements meant to establish a cease-fire in eastern Ukraine.

His remarks came days after key diplomatic engagements between Russia and Western countries on European security arrangements, including the situation in Ukraine.

In his speech, Macron also proposed a new alliance for Africa that would provide an “economic and financial deal” for the continent, ensure cooperation on health, climate protection, and the fight against human trafficking and illegal migration.

He said the bloc has to make clear its “relations with the Western Balkan countries and give them a clear perspective of accession to the European Union.”