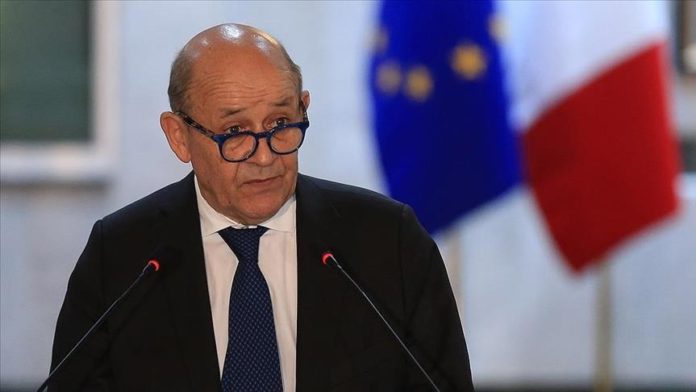 France has urged Moscow to use its influence to encourage the separatist territories of Donetsk and Luhansk to attend the trilateral contact group on Ukraine, the foreign ministry announced on Monday.

Minister Jean Yves Le Drian made the appeal in a phone call with his Russian counterpart Sergey Lavrov, the statement said.

At the behest of President Emmanuel Macron’s request, Russian President Vladimir Putin agreed to hold the meetings of the Trilateral Contact Group (TCG) constituting Russia, Ukraine, and OSCE – Organization for Security and Co-operation in Europe on the settlement of the situation in eastern Ukraine.

The statement said Lavrov accepted Le Drian’s invitation to visit Paris for a meeting on Friday, Feb. 25, to prepare for consultations for the upcoming summit between Putin and US President Joe Biden.

Macron has proposed a summit between the leaders of the US and Russia on the condition that Moscow does not invade Ukraine. The agenda for the summit will be drawn by US State secretary Antony Blinken and Lavrov in Geneva on Thursday.

Donetsk and Luhansk, which are party to the subgroup of the TCG, have rejected the meeting because they claim Kyiv has not backed the initiative with any concrete steps to stop fighting at the contact line and the meeting is just a PR stunt, a report by Russian news agency TASS said.

Earlier, Moscow had said if Ukraine reaches an agreement with both breakaway regions, it would also join the TCG talks.

They broke away from Ukrainian jurisdiction in 2014 following the coup in Kyiv. As war broke out the separatist territories received support from pro-Russian rebels to halt the Ukrainian advance.

The Minsk agreement brokered by France and Germany in 2015 and signed by Moscow, Kyiv, the Organization for Security and Cooperation in Europe (OSCE), and the leaders of two regions had detailed political and military plans to end fighting. This included an immediate ceasefire, withdrawal of heavy weapons, constitutional reforms, and elections in Donetsk and Luhansk.

Last week as the conflict intensified amid increased shelling on the contact line, the self-claimed republics of Donetsk and Luhansk announced the evacuation of their citizens to Russia. On Tuesday, Moscow also announced that based on the request by the leaders Denis Pushilin and Leonid Pasechnik it would take a decision on recognizing the breakaway territories of the Donbas region as independent states.