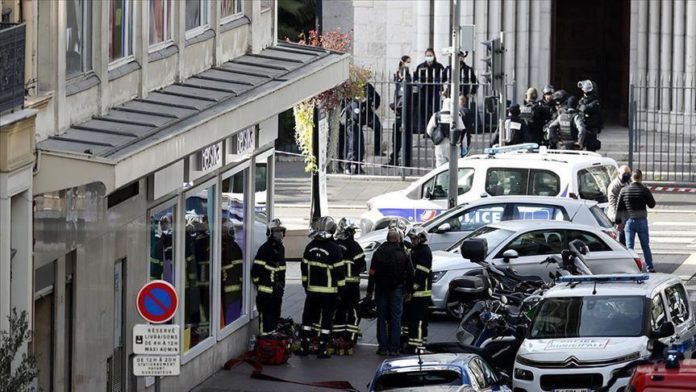 Police have taken four new suspects into custody over the deadly knife attacks in the French city of Nice last Thursday, adding to three others who remain in custody.

The main suspect, Brahim Aouissaoui, also has tested positive for the coronavirus. He remains in a hospital with gunshot wounds after being shot at by police. Law enforcement and those close to the case will now need to be tested.

The four new suspects, all male, were detained in Val d’Oise, a French department to the north of Paris.

Aouissaoui, a 21-year-old Tunisian national, brutally attacked several people Thursday at the Basilica of Notre Dame de l’Assumption in Nice just after 8:30 a.m. (730GMT), fatally stabbing two women and one man. One of the women was beheaded. Police fired upon the suspect, arresting him immediately.

A total of six other people had been detained by police, including a 47-year-old man arrested that Thursday evening who is said to have interacted with Aouissaoui on Wednesday. Three other men were arrested in Grasse, a town to the west of Nice; two of these men have been released.

Aouissaoui was neutralized by the police. The French National Anti-terrorism Prosecutor’s Office opened up an investigation immediately after the incident.

According to reporting by Franceinfo, Aouissaoui is said to have landed in Lampedusa on Sept. 20 before arriving on the Italian mainland in Bari on Oct. 9 and then crossing the border into France. Documentation from France’s Red Cross helped reveal facts about the suspect’s movements; he had been unknown to police before Thursday.

Given this and a string of other terror attacks in France last week as well as a deadly terror attack Monday night in Vienna, French President Emmanuel Macron issued a tweet Tuesday in support of the European Union.

Prime Minister Jean Castex moved France to the highest level of security alert on Thursday after the massacre.