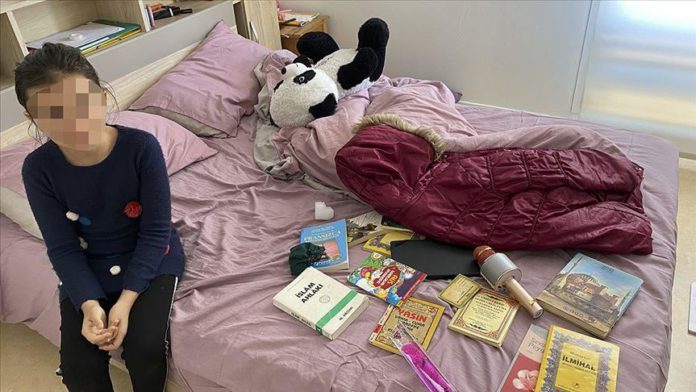 Four children aged 10 were held under police detention for more than 11 hours in Albertville, France on Thursday on charges allegedly related to “apology for terrorism,” according to a parent.

On a criminal provision enacted in November 2014 that criminalized “apology for terrorism,” French prosecutors have been aggressively pursuing anyone who speaks positively of a terrorist act or group even if their intention is not to incite violence or promote the group, according to the Human Rights Watch.

In an exclusive interview with Anadolu Agency, the father of one of the children who was detained by the police denounced the excessive use of force by police on Thursday morning.

“Before 7 a.m., the police knocked [the door] in such a way as to almost break it,” recalled the Franco-Turkish father, who was still in a state of shock.

“My 10-year-old daughter was accused of apologizing for terrorism, they woke her up from her sweet sleep,” the father said, remembering that the police ordered them all to sit down.

“They took pictures of the wall decorations, tried to find clues by searching the whole house. We went to the police station, after two hours of waiting they asked us a lot of questions about our religious belief, if we perform the prayer, etc.

“They questioned each one of us, my wife and I, for two hours. Apart from questions about our religion, they asked us what we thought about the tense relationship between [French President Emmanuel] Macron and [Turkish President Recep Tayyip] Erdogan,” said the father, judging that the questions were sassy and at times provocative.

“In the same way as in the morning, they clearly wanted to terrorize us with the noise and the excessive violence. I do not understand: 10 hyper-armed police officers, trying to, it seems, break our door, to come and get my 10-year-old daughter still asleep.”

Questions or remarks from children about cartoons

According to the father worried about his daughter detained for 11 hours, this operation “disproportionately aggressive and notably frightening” of police would be due to questions or remarks made the day before by the four primary school pupils, following a discussion in the class about the gloomy cartoons about Prophet Muhammad of Islam and the murder of Samuel Paty, the teacher who showed blasphemous cartoons in his class.

“My daughter might have made a remark on the murder of the professor,” explained the father, recalling that his child is only 10 years old and that “she does not know any of that.”

“These are not topics we talk about at home,” he said, adding that “everyone knows our family. The school knows us very well; we had several children who went to the same school. If there was a concern of radicalization with us, everyone would know.”

No response from police or school

The Albertville police told Anadolu Agency that they could not give information on the detention of the four children.

The parents interviewed by Anadolu Agency also noted that the police refused to provide them with a document relating to the reason for the detention of their child; or the interrogation to which they were subjected.

According to the father, two of the four children taken by the police were transported to Chambery, an Alpine town in southeastern France. He did not know which service took care of these two children.

The school where the incident took place did not respond to Anadolu Agency’s request for comments.

Twelve million students resumed school this week in France under improved sanitary conditions amid the coronavirus outbreak, in particular pupils aged six or above wearing the compulsory mask.

The return to school was also marked by the tribute to Samuel Paty.

National Education Minister Jean-Michel Blanquer announced last week that a minute of silence would be observed on Monday.

The teachers were given the option to organize a discussion during November about the brutal beheading of Paty, who showing cartoons, deemed insulting, of Islam and Prophet Muhammad.