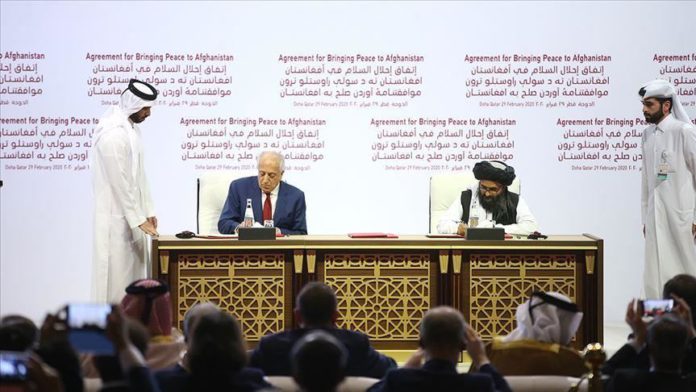 A rejuvenated yet fragile Afghan peace deal hinges on a slow-moving prisoner swap that is testing the patience of the erratic warring parties.

In line with the landmark US-Taliban peace agreement cautiously welcomed by the Afghan government, which felt sidelined, some 5,000 Taliban prisoners should have been released from government prisons in exchange for the release of around 1,000 security forces weeks ago.

But the freeing of prisoners came to a halt this week less than halfway through amid bitter exchanges of allegations and a surge in violence across the war-ravaged country.

The country’s National Security Council (NSC) declared that the government would hold up the phased release of insurgents until the Taliban completed the release of at least 200 security forces.

“The government has released 1,000 Taliban. Now they should release at least 200 security forces in line with the peace agreement,” the NSC said in a statement Monday.

Its spokesperson Javed Faisal told Anadolu Agency that the Taliban would be responsible for the failure of the peace deal if they did not comply with the agreed 1:5 ratio (one Afghan service member for five Taliban) in the prison swap.

“The government is only committed to take forward the prison exchange if this ratio is complied with and the insurgents stop killing Afghans,” he said.

As per the schedule chalked out in the Feb. 29 peace accord, the Afghan peace process should have been in the crucial intra-Afghan phase by now.

Faisal said that in return for the 1,000 Taliban freed from prisons so far, the insurgents have so far only freed 105 Afghan security forces.

However, defense analyst retired Brig. Ali Khail argued that serious differences over the mechanism of the prison swap coupled with a deep mistrust between the Taliban and the Afghan government meant the peace parley missed its deadlines and remained behind schedule.

“Even if you rule out the huge factor of the coronavirus pandemic disrupting everything, the officials in charge in Kabul have no confidence in the Taliban insurgents keeping their word in terms of releasing prisoners or ending violence,” Khail said.

That is why the Afghan government is cautiously moving ahead with the process while seeking guarantees from wherever it can,” he told Anadolu Agency.

According to the US-Taliban peace agreement, 5,000 Taliban prisoners should be released from government prisons and the Taliban should release 1,000 security forces before the crucial intra-Afghan talks on the future of the country begin.

The retired Afghan officer, who survived the Mujahideen’s toppling of the pro-Soviet government in the late 1980s, added there is deeper distrust at play on all sides.

“And if you look at the armed opponents (Taliban), they continue to defy calls for a ceasefire by the Afghans and the international community while powering through the deadlock in talks by attacking check posts all over the country, particularly in rural areas,” he added.

Hitting back at the allegations leveled by the Afghan government, the Taliban warned Washington of a looming catastrophe in Afghan government prisons in connection with the novel coronavirus.

“Responsibility here falls squarely on the shoulders of the United States of America because if it had shown urgency in the implementation of the agreement, we could have made major progress in all facets including the release of prisoners, and detainees would have been saved from this danger,” the group said in a statement.

The group’s Qatar office spokesman, Suhail Shaheen, on Monday announced the release of 53 more government forces in the northern Badghes and Faryab provinces.

The Taliban have been blaming the government, which they dubbed the ‘Kabul Administration,’ for undermining the peace deal with delays in the prisoner swap.

According to official sources, there are 12,000-15,000 inmates in Afghan government prisons across the country, including militants from Pakistan, Central Asia and Gulf countries. No figures are available on the captives held by the insurgents.

During his latest round of shuttle diplomacy in the region, the US special representative for Afghanistan reconciliation urged the Taliban to swiftly begin the proposed intra-Afghan talks.

“Lengthy meeting overnight with Mullah Baradar & his team in Doha. We sought progress on a range of topics: a reduction in violence, humanitarian ceasefire as demanded by the international community to allow for better cooperation on managing COVID-19 pandemic in Afghanistan,” he said on Twitter.

The US envoy added that the two sides also discussed acceleration of prisoner releases, actions necessary to secure the freedom of US citizen Mark Frerichs, regional and international support for the peace process, and movement to intra-Afghan negotiations “ASAP.”