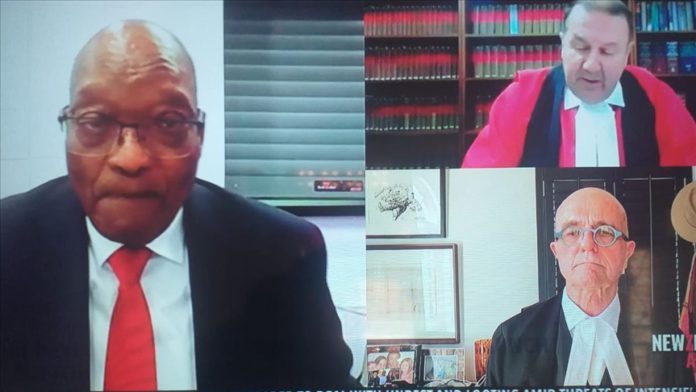 Former South African President Jacob Zuma on Monday appeared for the first time before a high court via video link as a corruption trial in connection to a 1999 arms deal began.

Dressed in a dark suit and red tie, Zuma, 79, looked relatively calm as he made his court appearance from the Estcourt Correctional Centre, where he is currently serving a 15-month sentence for contempt of court.

The former leader, whose jailing two weeks ago led to riots and looting in South Africa, sat quietly in a large office chair as he listened to proceedings.

Zuma’s legal representative Dali Mpofu asked Judge Piet Koen to postpone the matter as his client’s case could not be heard without him physically being in a court room.

Mpofu said his client doesn’t consent to the trial being conducted through virtual hearing.

“In a civil procedure, a postponement is requested when unforeseen events take place, for instance, if a car knocks the accused while he was supposed to appear in court,” he said.

The charges were dropped in 2009 by former National Prosecuting Authority head Mokotedi Mpshe, weeks before he was elected president.

But they were reinstated in 2018, marking one of the longest-running legal battles in the country.

The former South African leader was forced to resign as president by his own ruling African National Congress party in 2018 following various allegations of corruption linked to the wealthy Indian Gupta family, among others.​​​​​​​