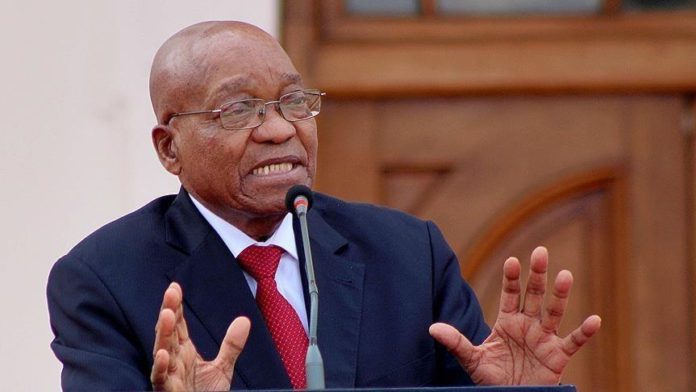 Former South African President Jacob Zuma, 79, is being held in isolation at a correctional services facility in the coastal KwaZulu–Natal Province where he began serving a 15-month jail term early Thursday.

“As precautionary and in line with the COVID-19 measures the former President is placed in isolation for a period of 14 days,” Minister of Justice and Correctional Services Ronald Lamola told reporters at the Estcourt correctional services facility where Zuma is being held.

Lamola said Zuma will be assessed by the facility’s health team in conjunction with the South African military health services to determine the conditions of his incarceration.

He also assured South Africans that although the former president will not be given the preferential treatment he will be afforded dignity throughout his incarceration.

Zuma decided to surrender late Wednesday after he was found guilty last week by the Constitutional Court for contempt of court.

The former president was found guilty of “deliberately” refusing to appear before a judicial commission probing corruption during his nearly decade in power.

In a rare ruling, the Constitutional Court ordered Zuma to hand himself to correctional services officials in five days or face arrest.

The deadline was midnight Wednesday.

In a bid to evade arrest, Zuma’s lawyers had approached the Constitutional Court last weekend asking for a recession on an earlier judgment. But the court did not respond leaving the former head of state with no option but to surrender.

This marks the first time in democratic South Africa’s history that a former president has been sent to prison.

Several prison officials assured South Africans that the former president will not be given special treatment and will be treated like any other inmate with his rights and dignity respected.

He will not have bodyguards, his security will be provided by the facility and will be granted six telephone calls per month.

Zuma’s arrest has ignited debate with his supporters crying foul and describing his dentition as politically motivated.

But one commentator, who spoke to Anadolu Agency, believes it sends a message to respect the judiciary and the rule of law.

“The arrest of former President Jacob Zuma into a custodial sentence is a lesson for other leaders in South Africa and indeed Africa as a whole, that no one is above the law,” said Dr. Mustafa Mheta, senior researcher at the Africa Desk of the lobby group, Media Review Network.

“It certainly will set to cement the people’s belief that democracy works,’’ he said, adding that it will set a precedent for leaders not to abuse power while in office.