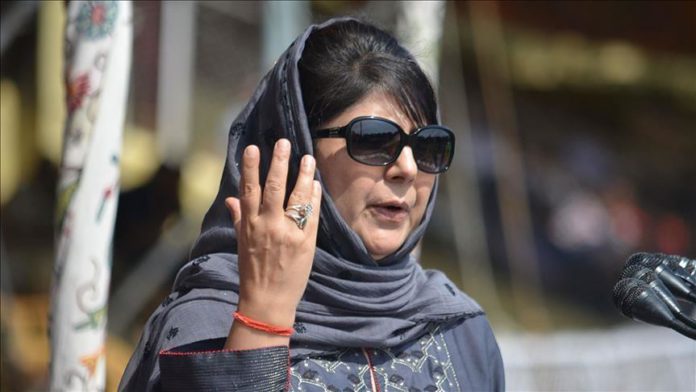 Former chief minister of Indian-administered Kashmir Mehbooba Mufti was released Tuesday after more than a year in preventive detention.

Mufti was detained Aug. 4, 2019, under the controversial Public Safety Act in which someone can be detained without a trial for up to three months and the detention could be perpetually extended unless a court intervenes.

Mufti, 61, was the only woman, and the last chief minister of the autonomous Jammu and Kashmir from 2016 to 2018. Her party, the People’s Democratic Party, and the Hindu right-wing Bharatiya Janata Party (BJP), formed a coalition government in 2015. But the BJP withdrew from the alliance in 2018.

She was detained one day before the Indian government scrapped the autonomous status of Kashmir and divided it into two federally-ruled territories. Dozens of pro-India politicians were held in jails, at their homes or a government-owned hotel in Srinagar in the run-up to the scrapping of special status.

But Mufti was the last top leader to be under detention reportedly because she did not reconcile to the altered political status and vowed to continue the fight for the lost autonomy. While many pro-India leaders were released earlier this year, her detention was extended several times.

Mufti’s daughter, Iltija, said the release has come as a “huge sense of relief to the family.”

“It is not just my mother. Kashmir remains to be an open-air prison. I hope the families of hundreds of people who have been detained illegally also heave a sigh of relief,” she told Anadolu Agency.

She said her mother has “certain responsibilities” as a political leader which she would be able to discharge after her release.

“Her detention was illegal from the beginning and the Indian government could have detained her only for so long. They had their own compulsions. Also, the Supreme Court had ordered them to take a decision on her detention,” said Iltija.

The elder Mufti will address a news conference Oct. 16, according to her party’s spokesman.