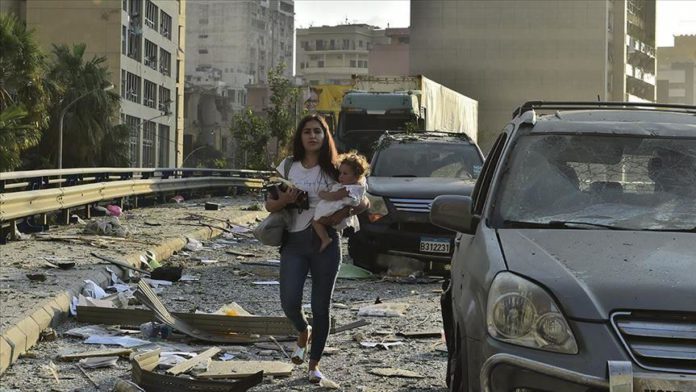 Several countries and organizations have announced the death and injury of a number of their citizens and staff of their diplomatic missions in Beirut massive explosion which has left at least 100 people dead.

The Egyptian Embassy in Beirut said in a statement on its Facebook page that one citizen was killed and another missing.

For its part, the Moroccan Embassy in Beirut reported that a Moroccan citizen who works for a UN body was injured.

Australian Prime Minister Scott Morrison said a citizen was killed in the blast and the Australian Embassy building in Beirut was severely damaged by the explosion, but the employees fled without serious injuries.

In New York, Farhan Haq, Deputy Spokesman for the Secretary-General, Antonio Guterres, announced in televised statements that 48 UN staff members, 27 of their family members and three visitors were injured as a result of the Beirut explosion, without giving further details about the nationalities of the victims.

Likewise, the Russian Embassy in Beirut stated, in a statement, that the embassy building was damaged and a female employee was slightly injured by shattered windows.

The Embassy of Kazakhstan also reported, in a statement, that the ambassador was wounded and parts of the embassy building were damaged in the explosion, without elaborating on the diplomats’ injury.

The Dutch Embassy announced in a statement that five of its employees were injured in the explosion.

For its part, the UN Interim Force in Lebanon (UNIFIL), announced that some of their personnel were wounded as a result of the explosion, without specifying a number.

The mission said that one of its vessels docked at the port was damaged, and some of its members were injured, including a number in critical conditions.

“We are transferring the injured peacekeepers to the nearest hospitals for medical treatment, while UNIFIL is currently assessing the situation, including the extent of the impact on the personnel of the force,” the mission added.

At least 100 people died and more than 4,000 were wounded in the blast, Lebanese Heath Minister Hamad Hassan said late Tuesday.

The Supreme Defense Council in Lebanon declared Beirut a disaster-stricken city, as part of decisions and recommendations to face the repercussions of the explosion.

Tuesday’s explosion deepens woes of the country that has been suffering for months from a severe economic crisis and intense political polarization.

US President Donald Trump claimed that the blast “looks like a terrible attack,” suggesting it was a bombing rather than an accident.