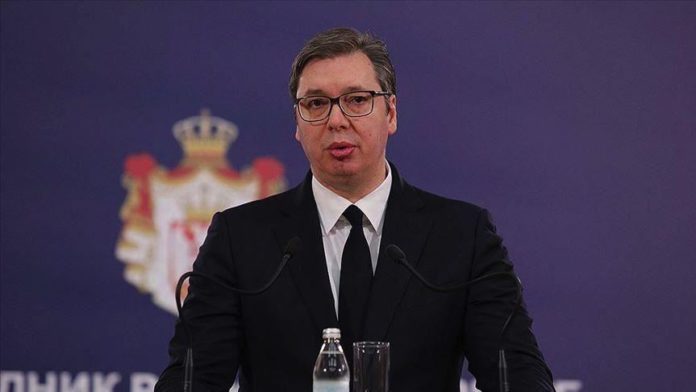 Foreign provocateurs helped escalate protests triggered by COVID-19 restrictions into a riot and led to arrests, said the country’s president on Wednesday.

At least 23 demonstrators were detained in Belgrade after a crowd tried to enter the National Assembly building late Tuesday evening.

“There was a failure on the part of security services because we only later saw that there was an influence not only of the criminal factor but also foreign services,” Aleksandar Vucic said in an address to the nation.

Vucic said that over the past eight years, Serbia has fully respected freedom of assembly, demonstration, freedom of expression and opinion, and has never violated the right of its citizens.

“Last night, we witnessed an aggressive political protest, not long after the protest began,” said Vucic, adding that the police acted with dignity and responded only when right-wingers stormed the Serbian Parliament, damaging Serbia’s reputation.

“We will not allow anyone to destroy peace and stability in Serbia, anyone inside or anyone outside,” Vucic said.

On Tuesday night, “extremists” took over the events in an organized way, he said.

Vucic added that the virus-related weekend curfew he announced on Tuesday will probably not go into effect.

Milorad Dodik, the Serb member of the Presidency of Bosnia and Herzegovina, said that the protests in Belgrade were aimed at destabilizing Serbia and its regional and international positions.

The protests “only benefit the enemies of Serbia and the Serbian people,” he said.

“All problems, if they exist, should be solved in institutions, in a democratic way, and not by violence or the demolition of one’s own city and property,” Dodik said.

The protest started over Vucic’s announcement of a weekend curfew to combat the COVID-19 pandemic.

Serbian Police Chief Vladimir Rebic on Wednesday said that the police officials were injured when hard objects were thrown at them.

He added that seven demonstrators were also injured.

He said that they are using closed-circuit cameras to identify people who were making a scene during the protests.

The clashes erupted near the National Assembly building, which was cordoned off by the police.

'COVID-19 could be wiped out in London by June'