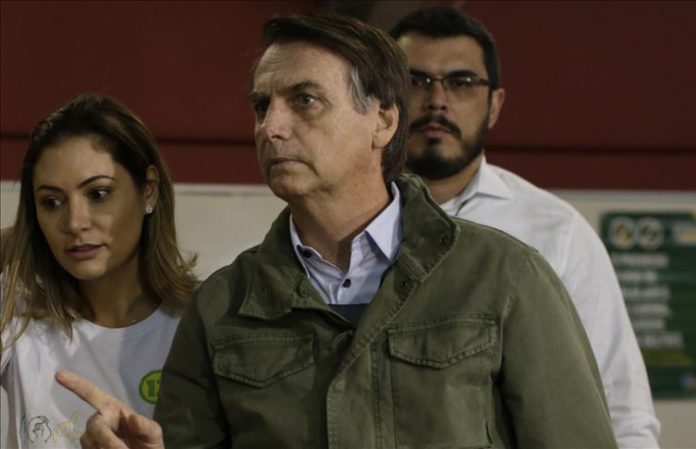 A group of 36 Brazilian companies and four business organizations have written to the National Council for the Legal Amazon led by Vice President Hamilton Mourao seeking “strong and effective” measures against illegal deforestation in the Amazon and other areas.

The businessmen said their main concern was the negative perception of Brazil’s image abroad due to poor socio-environmental management.

“This negative view has enormous potential for prejudice to our country, not only from a reputation point of view, but it also hinders business and other fundamental projects,” said the letter.

The pressure on President Jair Bolsonaro and his ministers grew when Deter, a program by the National Institute for Space Research (Inpe) that measures almost real-time clearing of the Amazon rainforest, showed in June that deforestation had increased compared to the previous year and for the 14th consecutive month, with the highest amount of deforestation since 2016.

The problem persisted, and July was also a record month, with more than 2,000 square kilometers (1,242 square miles) of deforestation.

Comparing June 2019 with June 2020, the destruction of the rainforest increased by almost 10%, reaching the largest area destroyed since devastation began to be officially monitored and controlled in 2015.

The group also proposed social and economic inclusion of local communities and the minimization of the environmental impact on the use of natural resources in the region.

“We need to start making the right decisions so that our investments are destined to face the crisis and recover our economy in a circular economic model, a low-carbon and inclusive economic model, without conflicts between production and nature conservation,” they said.

Meanwhile, 12 prosecutors requested the removal of Environment Minister Ricardo Salles, accusing him of the “destruction of the fundamental structures for the protection of nature.”

Although Salles is still in the federal government, he is under the scrutiny of Bolsonaro, who was very concerned about the claim of the businessmen and, above all, investors from abroad.

The concern of Brazilian businessmen regarding foreign investment was seen in a videoconference that Mourao held with representatives of investment funds from the UK, Sweden, Japan, the Netherlands and Norway who are part of a group of 29 capital managers that manage about $4 trillion.

The meeting ended with an ultimatum from foreign funds, who explained that to measure Brazil’s commitment to the environment, it would take into account factors such as “the significant reduction in deforestation rates, the implementation of a forest code, the prevention of fires in the Amazon and the transparent publication of preservation data.”

“We will continue to monitor what happens here in Brazil to measure our exposure to financial risks that come from the forest devastation,” the group said in a letter released by Storebrand, a Norwegian pension fund that is acting as a spokesperson in the joint action.

“We understand them, and it is logical that they want results. For our part, we will try to continue cornering and punishing those who carry out illegal deforestation in order to reach an acceptable number,” Mourao replied after the meeting.

The request for a meeting by the consortium of foreign investors in July came precisely during the beginning of the Amazon’s dry season, when more forest fires occur, preceding the illegal logging of timber and land exploitation.

Shortly after the tense meeting with foreign investors, the government led by Bolsonaro extended Operacao Verde Brasil 2 or Operation Green Brazil 2 until Nov. 6 — a program that gave freedom and significant funds to the Brazilian Army to fight forest fires in the region.

Although pressure from investors seems to be a starting point for environmental control in the Amazon and other Brazilian biomes (communities of plants and animals with common characteristics), some specialists believe the decree and military actions are just a form of crude political propaganda.

“Nobody believes anything from this government when it talks about the environment. Bolsonaro has been in government for more than a year and a half and never showed any plans in this regard,” said Marcio Astrini, an environmentalist and executive secretary of the Climate Observatory.

“As much as they try to deceive investors, they are going to want results, numbers, and I don’t think there is anything positive to show after all this time, that the government turned its back on deforestation,” said Astrini.

The expert also mentioned that Lubia Vinhas, a researcher responsible for monitoring forest devastation at Inpe, was fired from her position after disclosing data on deforestation in the Amazon which contradicted promises Bolsonaro and his ministers made to investors.

“The government tries to make up statistics and facts. It insists on changing the image of the Amazon, but it still does not want to change reality,” said Mariana Mota, coordinator of public policies at Greenpeace Brazil.

“Anyway, everyone is seeing that deforestation in the region is breaking records and the criminal burning season promises to be worse than 2019,” she added.

The Brazilian Institute for the Environment and Renewable Natural Resources (Ibama), one of the bodies affected by funding cuts, published a note in which according to the research of 600 employees, there was a 34% increase in consolidated deforestation between August 2019 and July 2020 compared to the same period between 2018 and 2019.

The devastation of the Amazon in the last 12 months could reach 13,000 square kilometers (8,100 square miles).

Meanwhile, a joint investigation between the Folha de Sao Paulo newspaper and the Talanoa Institute — a specialist in climate and socio-environmental issues — indicated that Bolsonaro’s government signed 195 acts related to the environment between March and May, months in which the COVID-19 pandemic accelerated in the country. These officially published decrees and actions include measures to enforce the implementation of laws against deforestation. But according to the analysis, there are also measures that seek to change the legislation.

At the meeting, Mourao offered investment funds to join one of the government’s latest projects, “Adopt a Park.”

The idea is to offer more than 100 national parks for private companies that are interested in “maintaining and conserving these green spaces” in an area corresponding to 15% of the 4,200,000 square kilometers (2,609,758 square miles) of the Brazilian Amazon region.

At the same time, the vice president is renegotiating with Norwegian and German funds to reactivate investments in the Amazon after being suspended last year after the fire crisis.

Libya pushes back at Macron's remarks on Turkey