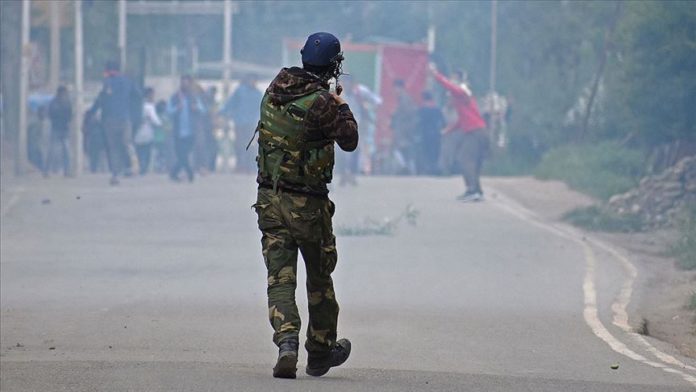 When my seven-year-old son’s Skype class started on Thursday, a disturbing message popped up in the chat box.

A parent of one of his classmates said his son could not attend the class because their neighborhood in Sringar, the capital of Indian-administered Kashmir, was tense.

Police had claimed killing three militants in Batamaloo, a warren of densely populated streets inhabited by pro-freedom people. A woman was also fatally shot while accompanying her baker son to his shop.

As a general practice, authorities shut internet services after such incidents to block news from spreading through social media and as a result quell protests for the slain militants.

The parent went on to say the Indian troops broke their window glass and were standing just outside their door. The teacher said a prayer for their safety.

The student lives about 2 kilometers (1.24 miles) away from my place. Scores of people protested on the streets that night against the woman’s killing.

In the class the next day, no one mentioned the incident or asked questions from the student. In fact, he had a jovial chat with another teacher.

This has been the story of Kashmir for the past 30 years. Exposure to prolonged violence and an uncertain future have damaged every aspect of Kashmiri life.

For Irfan Ahmad, a researcher born a year after 1990, when the raging anti-India insurgency started, the “very idea of peace is alien”.

He said that as a child, seeing Indian forces raid his home was a routine because his uncle was a militant.

“I grew up witnessing violence or hearing about it almost every day. I become irritated when my parents talk about the halcyon period of pre-insurgency Kashmir having cinemas, late-night weddings. I blame them for our plight as they had waited for long to resist,” he said.

One of his cousins, Ahmad added, gave up studies after being detained by police twice during the mass protests of 2016.

“He was only 12 when they detained him. Something snapped in him after his release. A police officer threatened him with sexual violence on his mother if he were to protest again. To me he appears like someone itching to explode,” he said.

Sociologist Farrukh Faheem said Kashmir has witnessed political strife since 1947 itself but the three decades of armed insurgency have been the most intense. In a small and close-knit place like Kashmir, he said: “Every death or injury resonates and traumatizes the entire population.”

And there appears to be no escape from the violence even when one is removed from the place, says Zahid Rafiq, a Kashmiri who is studying creative writing at Cornell University in the US.

“There are days when I really want to forget that people are being killed, tortured, subjugated while I walk into a bookstore of a café for a good meal. But the violence in Kashmir lingers stubbornly at the back of my mind. At times, I hope, like a child to see Kashmir free where we could finally live in peace, without fear, shame and subjugation,” he said.

He said every fresh eruption in Kashmir creates anxieties among hundreds of thousands of their kin working or living outside. During the communications blackout in August last year, Zahid said he could not speak to his family for several days. His son had been born only a month ago.

Last year, prospects of peace were jolted when India scrapped the region’s autonomy and divided it into two federally ruled territories. Since then, several laws introduced by the Indian government have triggered fears that Indian Hindus would overwhelm the native Kashmiri Muslims, who are in majority, and they would lose control over their own resources besides losing jobs to outsiders. Almost all key positions in the administration have currently been taken over by non-Kashmiris.

While abrogating the special laws, the Indian government said Jammu and Kashmir would develop economically and help Kashmir integrate psychologically with India besides curbing insurgency.

But, Suhail Bukhari, spokesman of People’s Democratic Party that shared power with the ruling Bharatiya Janata Party (BJP) until 2018, said last year’s changes dealt a blow to prospects of peace and “added one more layer of complexity to an already complex issue.”

“Nobody can deny that peace in Kashmir goes beyond Kashmir. Peace in Kashmir is necessary for peace in entire South Asia. We believe there is no alternative to reconciliation and dialogue,” he said.

According to Ashok Kaul, a member of the ruling Bharatiya Janata Party, however, peace is “only a few months away”.

He said the government has taken steps to ensure a lasting peace but the disturbances caused by the COVID-19 pandemic created hurdles.

“Peace will prevail, especially in Kashmir,” he told Anadolu Agency.

The apparently hopeless situation has not killed people’s craving for peace, says Faheem, who teaches at Kashmir University.

“But not the peace of the graveyard enforced at gunpoint. It is the just peace that recognizes people’s civil and political rights. We have seen how so-called peaceful periods quickly evaporated in air,” he said.

Prospects of a negotiated settlement are becoming bleaker by the day. Kashmiri academic Abir Bazaz told Anadolu Agency that condemning an entire people to a “life of uncertainty and perpetual war is simply inhuman”.

“Even those who must pay the price for the strategic calculus of nation-states, as Kashmiris do, reach a threshold beyond which the status-quo is impossible to endure. For Kashmiris, there is no end in sight to the war,” said Bazaz, an assistant professor at India’s prestigious Ashoka University.

He said “the most that one can hope in such a hopeless situation” is that the Kashmiris will continue to rely on their cultural and political resources to keep demanding their right to a life of peace and justice “without succumbing to the temptation of counter-violence”.

Kashmir, a Himalayan region, is held by India and Pakistan in parts and claimed by both in full. A small sliver is also held by China.