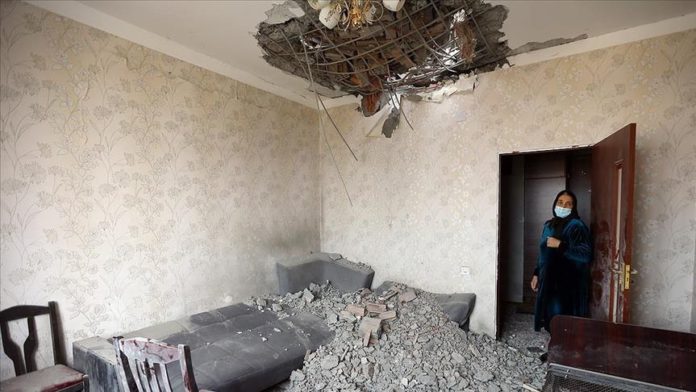 Housing blocks in the Tartar region where Azerbaijani families had settled after fleeing Armenian occupation were attacked dozens of times by the Armenian army in recent clashes.

Some 30 buildings, including apartment blocks, pharmacies, schools and houses were damaged in the attacks in the Shah district.

Nezaket Guliyeva, a resident, said this was the second time her house was destroyed by the invading Armenian side, the first being in 1992.

She said when clashes intensified in late September, she left her house to stay with her relatives. She returned to find her building damaged and the ceiling of her living room collapsed.

Recalling the first time her residence was targeted in Kalbajar, she said: “It was hard.”

She said they fled their town on foot in the snow.

“Our house there [in Kalbajar] was new. We were given a house here [Tartar], the Armenians destroyed it as well,” she added.

In an emotional moment, she said, if she could she would walk barefoot back to Kalbajar to visit her mother’s grave.

Dagistan Abdulayev, another resident in Tartar, said he had to leave Kalbajar to protect his siblings.

“It was very difficult. My skin peeled for 17 days, my feet were so swollen.”

He said they walked to safety for three days and night straight.

The Azerbaijani army entered Kalbajar region on Nov. 25 after 27 years of Armenian occupation.

Relations between the ex-Soviet republics of Azerbaijan and Armenia have been tense since 1991, when the Armenian military occupied Nagorno-Karabakh, also known as Upper Karabakh, a territory recognized as part of Azerbaijan, and seven adjacent regions.

'France handling COVID-19 better than most of Europe'