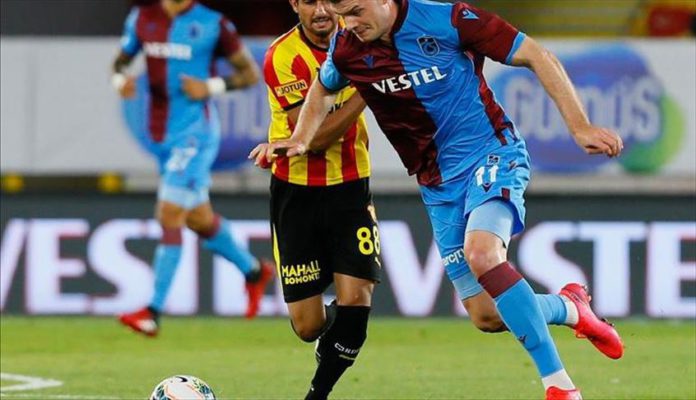 The Black Sea club took the lead but was unable to secure it as the visitors were awarded a penalty kick in the 60th minute when defender Joao Pereira was whistled for a handball in the penalty area.

Rodrigues was shown a second yellow card and sent off in the 82nd minute after a foul.

But Ankaragucu fought bravely to finish the match 1-1.

Ankaragucu have been seeking an exit from the relegation zone. The Ankara team moved up to 17th place with 25 points in 29 weeks.

Pereira is suspended for the next match against Galatasaray after being booked for arguing with the referee.

Second-place Trabzonspor has 58 points in standings.

But league leaders Medipol Basaksehir has 59 points. They will take on Galatasaray in a showdown Sunday in a high-stakes match between Istanbul clubs.

The visitors were down to 10 in the 65th minute when Turkish winger Gokhan Tore was sent off after fouling Fenerbahce midfielder Emre Belozoglu.

Fenerbahce forward Vedat Muriqi broke the deadlock in the 70th minute with a header for the 1-0 lead.

But midfielder Youssouf Ndayishimiye scored the equalizer with a header of his own in the 81st minute.

Eight minutes later, Yeni Malatyaspor came back as Dutch midfielder Mitchell Donald put the ball into Fenerbahce net. His shot from the penalty area beat goalkeeper Altay Bayindir for the 1-2.

The team is in the sixth spot with 46 points in the standings.