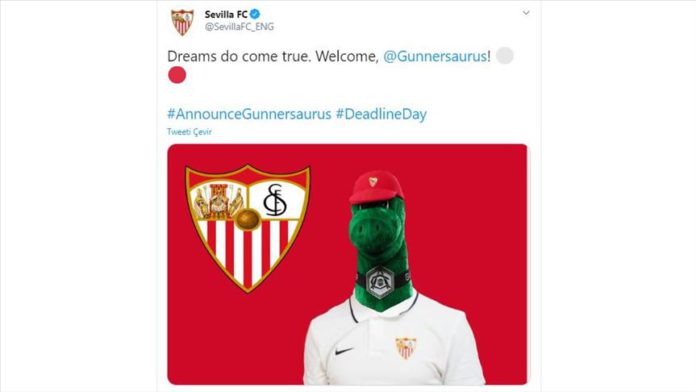 Beloved mascot ‘Gunnersaurus’ was introduced in 1993 to serve for London’s Arsenal for 27 years.

One of the largest clubs in the Premier League, Arsenal fired Gunnersaurus on Monday to cut costs amid the coronavirus pandemic as fans can not go to Arsenal matches in London for health reasons.

The Gunners fans got angry against Arsenal, slamming the club board on social media.

Jerry Quy has played the dinosaur role for almost three decades for Arsenal.

In the dinosaur outfit, Quy attended the club’s home matches to cheer fans in Arsenal venues, Highbury Stadium and Emirates Stadium as well as other club events.

Arsenal played their home matches at Highbury until 2006 as they moved to their new home, Emirates Stadium.

Separately an Arsenal fan, George Allen kicked off a fundraiser on “GoFundMe” to keep Gunnersaurus in the London club as the slogan for this campaign is ‘Save Gunnersaurus’.

“Welcome to Arsenal, Thomas Partey! …Thomas Partey has joined us on a long-term contract,” the English club said in a statement.

The 27-year-old had been an Atletico Madrid player since 2012 to make 188 appearances.

Partey won the 2018 UEFA Europa League title with Atletico Madrid and was the 2016 Champions League runner-up.

Now in the international duty with Ghana, Partey will join his teammates at Arsenal next week.

However the BBC said that Arsenal signed him from Atletico Madrid “on a long-term deal after paying his 50 million euros (£45.3 million) release clause.”

Separately the Gunners’ Uruguayan midfielder Lucas Torreira made his way to Atletico Madrid on Monday for a season-long loan.