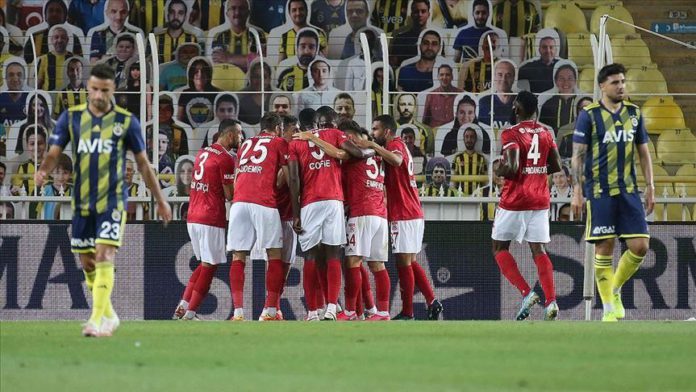 Demir Grup Sivasspor toppled Fenerbahce 2-1 in Sunday’s Turkish Super Lig match to sit in the third spot in the standings.

Sivasspor took the lead in the ninth minute at the Ulker Stadium as Ivorian forward Arouna Kone scored a penalty, 1-0.

In the 44th minute, the visitors made it 2-1 as Sivasspor’s Turkish midfielder Emre Kilinc had a through ball to the net for the winner.

Thanks to the first-half goals, Sivasspor secured the victory in Istanbul.

Third in place, Sivasspor boosted their points to 57 as the 2019-20 season will conclude in two weeks.

In the next match, the Yellow Canaries will visit rivals Besiktas for a derby.

Galatasaray extended their poor form in the league over the 1-0 loss to MKE Ankaragucu in the capital Ankara.

Ankaragucu’s Argentine midfielder Oscar Scarione scored the winning goal from the penalty spot in the 62nd minute at Eryaman Stadium.

So, Galatasaray was unable to win for eight matches in the league. The Lions, who have already thrown in the towel, got their last win on March 1 by 3-0 against Genclerbirligi.

They were one of the title contenders in the league at the time. But after that win, Galatasaray had four draws and four losses.

Galatasaray had 52 points in 32 games to be in the fifth spot in standings.

Despite the win, Ankaragucu were still in last place with 29 points.