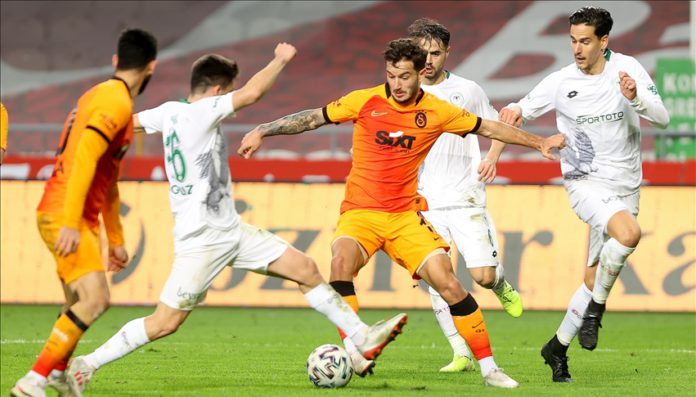 Konyaspor at home scored the opening goal near the end of the first half when Erdon Daci put the ball into the net with a left foot strike in the penalty area.

The goal was initially disallowed for offside but after a Video Assistant Referee (VAR) review, the ruling was changed.

Galatasaray pulled level in injury time of the half as Mbaye Diagne finished in the area to send the teams to the locker room.

Konyaspor took the lead early after the break when unmarked Daci hit a shot that hit the goalpost and went in.

In minute 75, Galatasaray were awarded a penalty when Norwegian right back Martin Linnes was fouled in the box.

Diagne took the penalty but it was saved by Konyaspor’s goalkeeper Ibrahim Sehic. But the referee awarded another shot because Sehic left the goal line early.

After the goal, Konyaspor manager Ismail Kartal was sent off for arguing with the referee.

Konyaspor were awarded a penalty kick in minute 82 after Galatasaray defender Christian Luyindama fouled Abdulkerim Bardakci in the penalty area.

Ugur Demirok converted to make it 3-2.

Playing from behind, Galatasaray had to take risks and Konyaspor made then pay on a counter attack in minute 92 when Ukrainian forward Artem Kravets finished in the box to go up 4-2.

The result gave Galatasaray 30 points in 16 matches and is in fourth place in the standings.

Konyaspor, meanwhile, boosted their points to 22 to move into the eighth spot.

Gaziantep FK are now leading the Super Lig with 31 points. The club from Turkey’s southeast beat MKE Ankaragucu 2-0 on Tuesday to top the league.