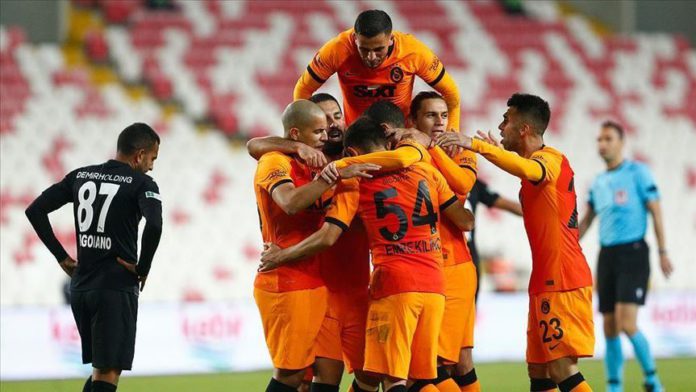 Turkish Super Lig title contenders Galatasaray beat Demir Grup Sivasspor 2-1 in a league match Sunday, a valuable win for the Lions putting them near the top of the league table.

Galatasaray earned 16 points in 8 weeks to come third in the standings. Archrivals Fenerbahce are in the number two spot with 17 points.

Aytemiz Alanyaspor from the Turkish Mediterranean are leading the league by goal average. They had 17 points as well.

In Sunday’s match in Sivas, Galatasaray took the lead in the 19th minute as Moroccan midfielder Younes Belhanda scored the opener with a left foot strike. Belhanda was unmarked near the half circle.

Galatasaray doubled the lead in the 48th minute when Turkish midfielder Arda Turan put the ball into Sivasspor’s net with a close-range finish. Belhanda assisted him.

Sivasspor’s Caner Osmanpasa narrowed the gap to one in the 76th minute to give hope to his team. Osmanpasa fired a right foot strike in the Galatasaray area. Galatasaray goalkeeper Okan Kocuk could not parry it.

However, Galatasaray secured a 2-1 win in the away game.

Visitors scored an early goal as Sefa Yilmaz made it 1-0 for the Ankara team.

Genclerbirligi’s Swedish right back Mattias Johansson was sent off in the 72nd minute, and they were down to 10 men.

Basaksehir’s Norwegian forward Fredrik Gulbrandsen equalized with a header in the 80th minute.

In the 94th minute, Turkish midfielder Mehmet Topal scored a header as Basaksehir completed the comeback at home, 2-1.