TurkishPress
Home News Floyd protests in US are outcry against Trump: Analysts 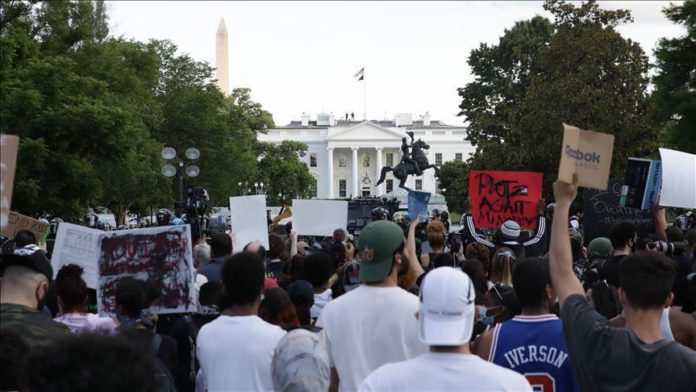 Nationwide protests following the death of George Floyd are not only an outcry against police brutality but also against Donald Trump’s leadership, according to American experts.

“Then we have the Trump presidency and our contemporary political crisis, which is not just a crisis of Trump’s authoritarian leadership, and malignant narcissism and chronic incapacity and unwillingness to demonstrate or display any kind of empathy, but a larger political crisis,” he said.

“And then on top of that, you have the recent killings, murders, lynchings of unarmed black people who are jogging or sleeping at home or out on the streets, conducting their daily lives.”

“We have Trump but we also have Trumpism, and he has emboldened the worst devils we have in our nature,” said McCarthy.

He added, alluding to President Abraham Lincoln’s first inaugural address: “And now we are in a tectonic and titanic death-match in this country, between the better angels of our nature as Lincoln articulated it during the Civil War and the worst devils of our nation. That’s where we are.”

McCarthy also said he thinks the protests are “an outcry that comes from a place of pain, suffering, fear and anxiety, multi-generational trauma and oppression,” and they have become “louder and more sustained” than the country has seen for over half a century, in the days of civil rights demonstrations and anti-Vietnam War protests.

Stephen Ferguson, a lecturer at North Carolina State University’s philosophy department, underlined that “the biggest issue” is the way police unions operate in the US.

The US can see now with the protests that most Americans have “zero tolerance for this type of police brutality,” whether black or white, he said, and added: “So the problem is not that citizens don’t recognize the need for reform. Our federal government is incapable of making reforms because of the police unions.”

Stressing that this an “institutional” problem, Ferguson cited the low conviction rates of police officers involved in shootings, saying “you’re talking about basically a 98% probability that they won’t be convicted.”

Floyd, 46, died on May 25 in Minneapolis, Minnesota when police officer Derek Chauvin knelt on his neck for nearly nine minutes. His last words, “I can’t breathe,” became a slogan for worldwide protests.

His death prompted largely peaceful protests, though some have devolved into violence and looting.

Three other officers at the scene were charged with aiding and abetting murder in the second degree.