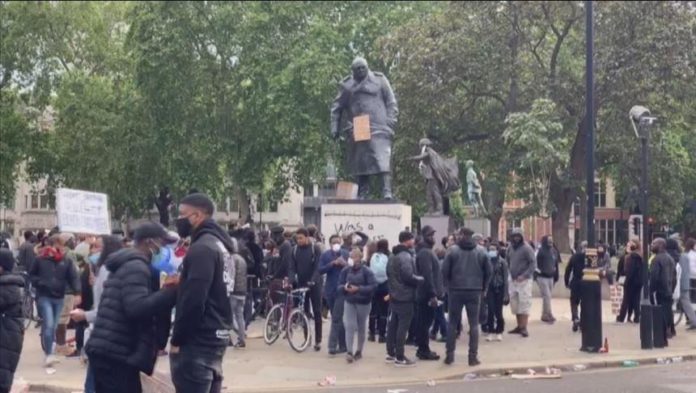 Amid continued protests over the killing of George Floyd in police custody, historical monuments in both the US and Europe are being targeted due to their links to the West’s history of slavery and colonialism.

Floyd, 46, an unarmed black man, died after being pinned down on May 25 by a white police officer in Minneapolis, Minnesota after reportedly attempting to use a counterfeit $20 bill.

His death has prompted weeks of mass protests across both the US and Europe, and spurred calls for works honoring racist figures to be removed.

Sculptures and monuments honoring figures from the Confederate States, a group of states that tried to leave the US in 1861-1865 to preserve legal slavery, are being targeted by protesters.

During demonstrations in Washington D.C., protestors toppled the statue of Confederate Gen. Albert Pike on Juneteenth, a date marking the end of slavery. Then they set the statue on fire. Pike was a figure symbolic of the pro-slavery era with alleged links to the racist Ku Klux Klan.

In Richmond, Virginia, the capital of the Confederacy during the Civil War, people demand the removal of many statues along Monument Avenue and sprayed writings about Floyd on them.

Governor Ralph Northam said the statue of famous Civil War Gen. Robert Lee and other statues of Confederate figures would be removed.

Lee was the head of the army of pro-slavery Confederate States during the 1861-1865 war.

Statues of Christopher Columbus, the 15th century Italian explorer, were also targeted on the grounds that his voyages were a precursor for the violent extermination of local populations.

In Virginia, his statue was dumped in a lake, and another was decapitated in Boston, Massachusetts.

Demonstrators also dismantled the statue of Jefferson Davis, former president of the Confederate States, in Richmond and demanded the removal of many other statues in the city.

Protestors also decapitated many statues dating back to the Confederate era in Portsmouth, Virginia.

Statues and other symbols of the West’s colonial past have also been targeted by demonstrators across Europe.

In the UK, protesters tore down a statue of 17th century slave trader Edward Colston and dumped it in a river in Bristol.

Colston, a native of Bristol, was known to have transported around 100,000 African slaves to the UK. Over 20,000 Africans died in those voyages and many of their bodies were thrown into the sea.

He was an active philanthropist in his home city and has several roads, schools, and other landmarks named after him.

The demonstrators also spray-painted “Black Lives Matter” across the statue’s chest, a reference to symbols branded on slaves.

Protestors struck out his name and wrote “was a racist” under it. Police took the statue under protection after the incident.

Activists in the UK have published a list of 60 people linked to the country’s long history of slavery.

A statue of 18th century British slave trader Robert Milligan was also removed from outside the Museum of London Docklands earlier this month.

Milligan was not a prominent figure in the slave trade, but owned more than 500 slaves at his sugar plantations in Jamaica when he died.

Cecil Rhodes is one of the most controversial names in the slave trade, whose statue in Oxford University has drawn the ire of anti-racism protesters.

The businessman and politician, who played a major role in the colonization of South Africa, is known as the mastermind of apartheid in the country.

Admiral Horatio Nelson, one of Britain’s national heroes, has also been targeted by activists for opposing the abolition of slavery.

Protesters have also demanded the removal of a statue of King Charles II in London’s Soho area.

He was the founder of the Company of Royal Adventurers of England Trading to Africa, which led the slave trade from Africa across the Atlantic for many years.

Protesters also want a statue of South African soldier and politician Jan Smuts across the British Parliament removed, along with a statue of British Gen. Lord Kitchener, who also served in South Africa.

Statues of pirates and explorers such as Francis Drake and James Cook have also been targeted by activists.

A statue of King Leopold II was removed from a public square in the Belgian city of Antwerp.

Red paint was poured on another statue of Leopold on the outskirts of Brussels, while thousands of people signed an online petition over a week calling for the removal of all his monuments.

He was responsible for the death of millions of people in the Belgian colony of Congo Free State between 1885 and 1908, which was treated as the brutal monarch’s personal property.

Leopold’s administration inflicted exceptional cruelty on locals working on rubber plantations, such as cutting off their hands for low productivity.

Despite his appalling actions, Leopold remains one of Belgium’s most revered monarchs, being remembered as the “Builder King” who contributed to the country’s prosperity and development during his reign from 1865 to 1909.

Several streets, squares, and parks across the country are named in his honor, and many Belgians believe he should not be discarded from the country’s history despite his brutality.

A statue of Indro Montanelli, a renowned Italian journalist who defended colonialism, in Milan was daubed with red paint and defaced with the words “racist, rapist.”

Activists requested the removal of his statue because he bought and married a 12-year-old Eritrean girl during his military service after Italy occupied Ethiopia.

Giuseppe Sala, the mayor of Milan, declined the request, saying the statue symbolizes Montanelli’s work as a journalist.

A group calling themselves “Heroes of Never” attacked the front facade of an art center named after former Vice Admiral Witte de With, and the statue of former Admiral Piet Hein in Rotterdam.

The group said it is against the glorification of the period in which the Netherlands founded colonies, traded slaves, and robbed art.

It demanded that “wrongful heroes” such as Piet Hein should be rejected.

UK, Japan 'stand side by side' on many issues