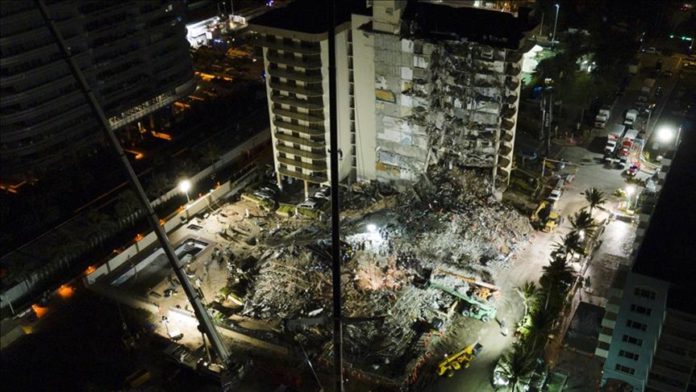 Florida Gov. Ron DeSantis has elicited sweeping condemnation on social media for posting a controversial photo of himself alongside rescuers as families slam the pace of ongoing rescue efforts following a partial building collapse.

.@FLCaseyDeSantis and I took a moment to thank first responders who haven’t stopped working for five days in the Surfside relief and recovery efforts. Thank you to the hundreds of first responders and law enforcement on scene, and the countless volunteers for your selfless work. pic.twitter.com/6MY4tMYXuY

Desantis posted a photo Monday on Twitter of himself alongside dozens of rescuers in Surfside, Florida as he, state first lady Casey DeSantis and many of those pictured can be seen smiling. The photo was taken amid ongoing rescue efforts that have not pulled someone from the rubble alive since early Thursday, when operations began.

Concern has mounted that with each passing hour, the chances of finding survivors among the sprawling debris field, which has sunk underground, is diminishing.

One user retweeted DeSantis’ photo, calling it a “disgusting” picture “with smiling faces.”

“Beyond gross, it is Another example of his @GovRonDeSantis priorities A photo op,” she said in a follow-up tweet.

“What is there to smile about?? One thing to thank them for their service, another to be smiling in the midst of a tragedy when the work has barely begun and so many are suffering,” added another user.

Another questioned the wisdom of having the photo op “while some are grieving and still hoping their loved ones are still alive? #dobetter.”

So far, 11 people have been confirmed dead with over 150 other victims unaccounted for following nearly six days of rescue efforts that has included state, local and federal teams as well as assistance from Mexico and Israel. The number of dead is widely expected to rise.

Over 200 first responders are combatting difficult conditions with shifting rubble, making it difficult to excavate pieces of compacted concrete and twisted metal at the now pancaked Champlain Towers South condominium in Surfside.

Rescuers are using several types of equipment including a crane to lift larger pieces of debris and jackhammers and saws to make progress below ground.

Frustrated family members have repeatedly criticized the pace of operations as they await word from authorities on the status of their loved ones.

William Sanchez, the nephew of two individuals who remain missing, told CBS News that he wishes officials had moved more quickly to address the crisis in its early days.

“We went through Hurricane Andrew down here. I know what a tragedy is. But there was a very slow response,” he said in reference to the efforts that began after the early-morning collapse on Thursday.

Sanchez said that if not for the ongoing COVID-19 pandemic, his aunt and uncle would have been traveling the world rather than staying in their condo.

“They were simple people. They’d send us pictures roaming around Turkey and different parts of Latin America, Africa, Asia. So that’s exactly what would’ve happened; they would’ve been somewhere else.”

Officials have bussed the victims’ families to the site of the rescue operations, and over the weekend, one mother used the visit to make her frustrations known.

“My daughter is 26 years old, in perfect health. She could make it out of there,” a mother told rescuers, according to a video of the meeting posted to Instagram and reported on by the Los Angeles Times newspaper. “It’s not enough.”

“Imagine if your children were in there.”