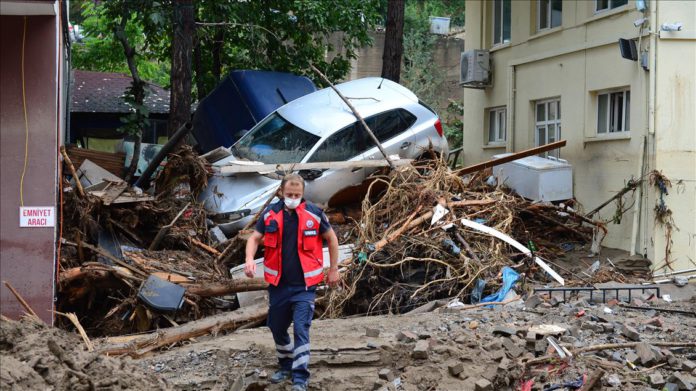 The death toll from floods in Turkey’s Black Sea province of Giresun rose to five, the country’s president said Sunday.

“According to initial reports, there were five loss of lives and the number of the injured was as many as 12 due to the heavy floods,” said Recep Tayyip Erdogan.

Rescue operations are underway, he said, with nearly 150 saved from the deluge so far.

GIRESUN, TURKEY – AUGUST 23: A view of damaged site hit by a flood due to heavy rain in Dereli district of Giresun, Turkey on August 23, 2020. ( Gültekin Yetgin – Anadolu Agency )

Erdogan also offered condolences to families of those who lost their lives in floods.

Those who lost their lives included a gendarmerie officer.

Later in the day, Soylu said the roads to 118 villages had been closed, with 20 having been reopened so far. Also, power had been restored to a total of 40 residential areas out of 78 where there had been outages due to the floods.

A total of 944 personnel had been deployed in the rescue efforts, he added.

The floodwaters demolished 17 buildings and slightly damaged 361, said Environment and Urbanization Minister Murat Kurum in a press briefing at the scene.

For his part, Agriculture and Forestry Minister Bekir Pakdemirli said damage assessments were underway and that farmland had suffered less damage than initially estimated.

US new home sales rise in December above estimate