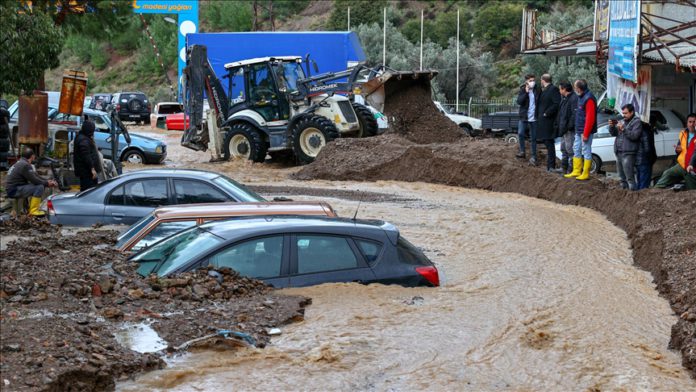 Heavy rainfall in western Turkey flooded parts of the province of Izmir, leading to two dead on Tuesday.

A vehicle carrying Hidir Ozturk, 65, and his son-in-law Kaan Soydan went missing amid the floods in Menderes district on the Aegean Sea coast.

Search units found the bodies of both hours later, along with their vehicle. Soydan was found nearly two kilometers (1.24 miles) from the scene.

Nearly 2,400 search and rescue personnel and over 450 vehicles were deployed in response to the flooding that occurred after 19 streams overflowed amid the showers Monday night, according to Ismail Catakli, deputy interior minister.

Homes across five neighborhoods in Menderes were evacuated due to the floodwaters.

Also, an industrial site in the Balcova district was affected by soil and dirt dragged by the rainwaters amid the deluge.

The mud dragged by the flood reached workplaces and roads were closed. Vehicles on the site also got stuck in the mud.

Around 50 houses and workplaces, as well as 40 vehicles, were damaged.

The Gulf of Izmir turned into muddy brown due to the floodwaters flowing into the sea.

US lawmakers vote to stop Trump warmongering with Iran