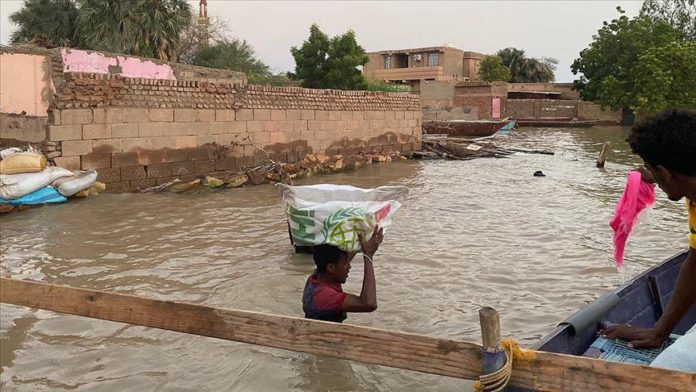 Hussein Kamal, 52, has lost his 7-year old son in the floods that ravaged the suburb of al-Fitaihab in the Sudanese city of Omdurman.

The son, Barra, lost his life when the family’s house collapsed by the flash floods as they were sleeping.

“We lost our lovely son. Life means nothing now to me,” his mother Kaltoum Omer, 46, said, with tears rolling down her checks.

“One of the house walls began to collapse as we were sleeping,” the mother recalled. “We woke up to find my son under the debris.”

The family rushed the injured son to hospital in a desperate attempt to rescue his life. “But when we reached there the doctor told us that my son died few minutes ago,” the bereaved mother said.

“When we returned back, we found out that the house has totally collapsed,” she said. “We have lost everything.”

The flash floods, which have struck much of Sudan since July, have killed more than 100 people and inundated thousands of homes.

The Sudanese authorities have declared a state of emergency for three months nationwide and designated Sudan as a “disaster area” over the floods.

Salah Adam, 44, has taken shelter with his family at a school after their house collapsed in Mayo on the southern outskirt of Khartoum.

The school is now home to around 100 displaced families, who lost everything after the devastating floods ravaged their poor area.

Around the school, young volunteers can be seen distributing food packages provided by a number of friendly countries and the Sudanese authorities to the displaced families.

Speaking to Anadolu Agency, Adam, a father of four, said that the floods have destroyed his house, which he took seven years to build.

“I’m a laborer and I got two kids, who dropped out of school to help me,” he said. “My other two daughters are helping their mother in her work of handcrafting some small things like women bags.”

“It’s totally impossible for me to rebuild this house now, I need the government to help me,” Adam lamented.

Outside the school, debris of houses and cars are scattered around, as some people are running to catch pieces of furniture and electric devices.

Weak response
Volunteers have criticized the government for its weak response to the floods.

Taha Abdin, a member of the Sudanese Revolutionary Committee in Tuti area of Khartoum, said the civil defense, police and other government institutions as well as the Humanitarian Aid Commission (HAC) have come too late.

“We were standing alone in front of this huge floods, using our few primitive materials but we definitely failed,” he said.

Thousands of people were evacuated from Tuti island, where the Blue and White Niles meet, after their houses were destroyed by the floods.

“This area is not only a place where thousands of people live, but it is also an important historical and tourist place,” Abdin said.

Ahmed Abdul Rahman, another volunteer, said the Sudanese civilians were disappointed by the government’s response to the floods.

“We are disappointed that after all the sacrifices we made as youth in the revolution, the transitional government’s performance was not even better than its predecessors,” he said.

But Abdul Ghalil Abdul Rahim, a spokesman for the Sudanese Civil Defense Authority said the government has rushed to provide help to Tuti and other affected areas.

“These floods were the worst in the past century and we all know the current economic situation in Sudan, so we are doing our best to respond and help the people,” he said.

The spokesman said more than 40 villages and areas have been evacuated due to the floods and heavy rains.

“The authorities have ordered the evacuation of all people living near the River Nile or on the streams of torrents in many parts across the country,” he said.

He expected the number of people displaced by the floods to reach one million. “We are doing our best but to be honest the disaster is bigger than our capacities,” he said.