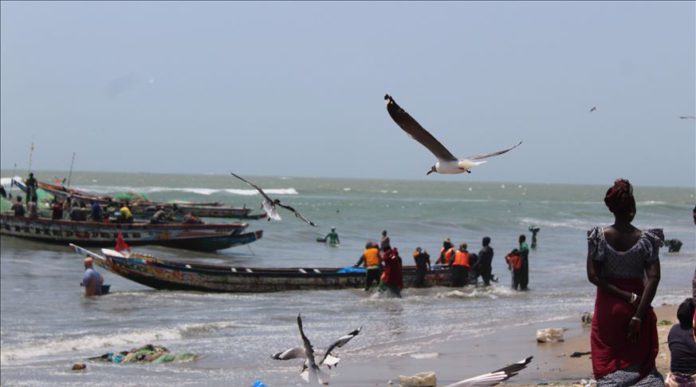 Despite the Gambia River crisscrossing its territory and sharing an 80-kilometers (49.7 miles) long coastline on the Atlantic Ocean, fish is drying fast from the waters of West African country the Gambia, affecting nearly 200,000 people.

“There is no fish in the waters. We used to catch up to 90 trays of sardinella fish a day and now we barely get five trays a day,” said fisherman Dembo Touray, 37, sitting on a wooden plank near cold storage in Bakau, home to the country’s largest fishing community, 16 minutes’ drive from the capital Banjul.

Fishermen experienced a significant decline in catches and like Touray said they have seen 84% slump.

Ismaila Jassey a fisherman for over the past 30 years is facing a similar fate. He said for even a moderate catch, fishermen need to travel far, deep into the sea, meaning more investment in fuel and nets.

Quoting a study conducted by the Food and Agriculture Organization (FAO), Dawda Saine, a marine biologist told Anadolu Agency that fish stocks have been overexploited in the Gambia.

Speaking to Anadolu Agency, fish vendor Abdourahman Ceesay, 28, said the amount of fish he would sell in two days now takes over two weeks. Due to the scarcity of fish, their rates have also skyrocketed.

“A kilogram of ladyfish and barracuda now cost $5. Most people cannot afford it. Some fish weigh about five or six kilograms, meaning that a customer has to shell out $20, unbearable for the pocket of an ordinary person, “he said.

Although the Gambia has a 321 km (200 mi) exclusive economic zone (EEZ), but due to the limited capacity of the country’s navy, only 96 km (60 mi) is in operation, according to Fisheries Minister James Gomez. This gap in the country’s sea surveillance capacity means illegal trawlers infiltrate into the country’s waters to exploit resources.

To help small fishermen, Gambian law bars trawlers to catch fish within a range of 16 km or 9 nautical miles from the shores. But in absence of a strong surveillance system, trawlers often violate the law.

“There are trawlers all over. You can see them even less than 150 meters from the shores. They use bad net size and kill fish indiscriminately,” said Touray.

According to a report published by a High-Level Panel for a Sustainable Ocean Economy in August, countries like Gambia, Guinea, Guinea-Bissau, Mauritania, Senegal, and Sierra Leone are losing nearly $2.3 billion to illegal fishing annually.

With the help of a US-based NGO called Sea Shepherd, off late many arrests have taken place and many of the trawler owners were found to be Chinese nationals.

Bamba Banja, permanent secretary of the Fisheries Ministry lamented at the lack of capacity of the government to check illegal fishing.

“As a government, we are handicapped. We are assisting the navy to get a boat to better patrol these areas. Capacity is a major constraint,” he said. Data available with his ministry suggests that in two years 2018-19, authorities have apprehended 32 fishing vessels.

While in 2015, former President Yahya Jammeh had banned industrial fishing, it was lifted by the subsequent government in 2017, which issued 73 licenses. Since then more licenses have been issued.

In 2018, Gambia also agreed with Senegal, allowing industrial fishing vessels to crisscross respective waters. The country also signed a six-year pact with the European Union allowing vessels to catch 3,300 tons of tuna and 750 tons of hake every year.

In return, the EU has agreed to contribute 550,000 Euros ($646,874) to develop the capacity of fisheries and improve government revenue.

“The access given to the Senegalese fishermen under the agreement has increased fleet exploiting the small pelagic,” said a scientific study released by FAO in 2017.

The Gambia has three fish meal and fish oil factories located at the heart of the country’s one of busiest fishing localities Sanyang, Kartong, and Gunjur. Research has shown that fish meals are a major driver, forcing overfishing and illegal catches in the country’s waters. Fish meal is a commercial product made from fish used to feed farm animals

Speaking to Anadolu Agency, Peter Hammarstedt captain at the Sea Shepherd ship, which helps the Gambian navy said some of the detained trawlers that had entered 9 nm (16 km) zones were to deliver fish to fishmeal factories. Of the 16 trawlers caught since 2019, 11 were in the special management area.

Many environmental activists like Ahmed Manjang are up in arms against the industrial production of fish meal. He told Anadolu Agency that cheap fish like sardinella and bonga are used to produce fish meal, making them unavailable for an ordinary person, whose only source for animal protein is fish.