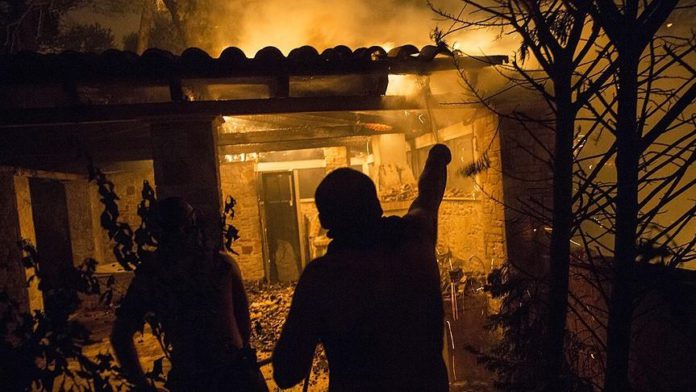 A wildfire erupted Saturday in the northwestern Peloponnese region of Achaia, according to fire officials.

The blaze has been burning a forested area in Zeria village where nearby villages of Ano Zeria, Kamares and Lampiri, including Zeria, have been evacuated.

Authorities said five people have been taken to the hospital with breathing problems while 20 houses have been burned.

About 290 firefighters, along with 75 vehicles and teams on foot are battling the blaze.

The European Emergency telephone number 112 has been activated for the affected area.

Meanwhile, traffic on the main national road connecting Patra-Corinth has been closed.

Authorities said several fires have broken out in parts of the country.

Earlier this week, a fire in Stamata and Dionyos of the northern suburbs of the Attica region damaged several houses and burned cars, while acres of thick pine forests turned into ash.

The Achaia region was also affected by another fire on Wednesday, causing the evacuation of several villages and it burned huge parts of the forest in the area.

Summer has always been a fire season for Greece.

It suffered one of the worse fires in Greece’s history in July 2018 in the Mati resort in the Attica region with 102 people killed, including several children.

It ravaged more than 5.600 hectares, burning houses and cars.